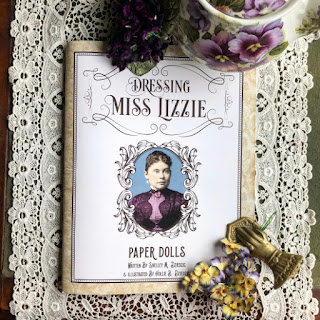 Today in History: Lizzie Borden was acquitted on June 20, 1893 of murdering her father and stepmother.

Lizzie Borden is alive and well these days with new movies, books and now some interesting new products!

I really like this idea! I used to love paper dolls, still do, and this is definitely unique. 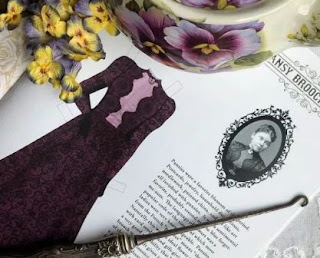 The book contains 12 depictions of Lizzie's dresses, derived from descriptions in newspapers of the day as what Lizzie wore in 1892 and 1893 was as much a part of the story as what she did.

Most fitting for today is her "Acquittal Day" dress. (Shown is the Pansy Brooch dress.)
(Photos: Lizzie Borden Warps and Wefts, Hollister Press.)

The book includes details of the gowns and where they were worn as well. Of course, this almost seems too pretty and interesting to cut into! Price is $18.92 plus shipping.

You can also get the book at the Lizzie Borden B&B gift shop (the original murder house in Fall River, Mass. , the photo isn't up on the page yet), in addition to other books (like Lizzie Borden, Zombie Hunter.)

Posted by CA Verstraete at 7:38 AM No comments: 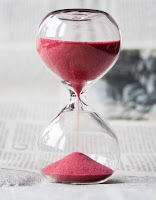 Yes, I'm late. Been busy working on a new idea! And, hey, summer is here. (Well, kind of. Been so cool, rainy  lately in the Midwest. But nice enough to get outside - and catch ticks! It seems every time I garden or pull weeds, the ticks find me!)

Anyway, there's always new stuff to read! I love anthologies, so here are some new ones I came across, plus some other book and release news . Enjoy!

Lost Highways: Dark Fictions from the Road - Joe R. Lansdale and others - There are people doing everyday, normal things. Then there are the desperate and lost, the cruel and criminal... and then there are the stranger things... places not on any map, the legends weary travelers whisper about. Stories... or are they? Introduction by Brian Keene.

The Best Laid Plans: 21 Stories of Mystery and Suspense Superior Shores Anthology Book 1, Judy Penz Sheluk - Many best laid plans come with no guarantees as these 21 authors show in their stories.

Classics Remixed: An anthology of new spins on classic tales - Steve Rouse and others - A writing friend had the nerve to tackle Moby Dick, a book that's on my most hated list. But... knowing him, I bet he definitely has a better twist on this classic.  This looks like a fun read!

The surviving aircrew is grounded and ordered to maintain their silence about the possible emergence of an old enemy so ruthless its sole purpose is to wipe out humanity. In the past, the fanatical Gaia Cult has used the potent Inferi Plague Virus as a terrorist weapon. The zombie virus kills, brings the dead back to life, and instills in the resurrected Scourge the overwhelming need to bite and spread the contagion. If Machie’s suspicions are correct and the dangerous Gaia Cult has returned, then an apocalyptic outbreak is imminent, and it will be up to her to save her loved ones and find a safe haven in a dead world.

Author Jean Rabe's third Piper Blackwell mystery, Dead of Summer, will be coming out in July! I've read this pre-pub and it's a good one! Love the covers, too. Be sure to read all three!

A new book is coming in the colorful, New Orleans-based Scrapbooking Series by the team of Laura Childs and Terrie Farley Moran. Following up on  Glitter Bomb,  comes Mumbo Gumbo Murder. (Pre-order, releases Oct. 1). The setting this time is Jazz Fest, with giant puppets, a puppet theater and of course... murder!

Author Stephen D. Sullivan also has a unique book series and the latest coming out soon is The Tournament of Death 4. If you like fantasy, odd creatures and fighting tournaments, you'll like this one. I got to blurb it, too. Details to come, but check out his website.

(If you like classic monsters, be sure to also read Stephen D. Sullivan's serialized stories, Dr. Cushing and the Chamber of Horrors, see prologue; and his gothic horror series, Frost Harrow.