I was gifted three wickedly handsome wolf princes…
…but now I’m the wolves’ prisoner.
I’m Crimson Tide. For centuries, witches have been at war with werewolves. As a kid, mom coached me that I was a Charmer with the badass magical power to control the scorching hot shifters.
Except, what if controlling them makes me the bad guy? How do I save my own witchy ass, as well as Wolf Kingdom, when I’m trapped in a wild land of fanatics and secrets?
To survive in the Kingdom of the Alphas, I must:
Rule #1 Never be tempted by the cursed protection of an Alpha
My pack hold dark and dangerous pasts, but I’m still driven to protect the gorgeous shifters, angels, mages, and gods who are mine.
Am I right to trust that they’ll protect me back? Or will loving the wolves get me killed?
Either way, I’ll fight for the wolves’ freedom and create a new legacy for the name Crimson Tide……or like the Charmers before me, I’ll become my princes' worst nightmare.


* Get the entire trilogy here.

Posted by CA Verstraete at 4:56 AM No comments: 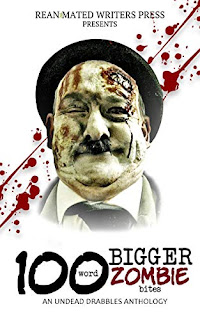 It's out now in Kindle! All kinds of 100 word stories in 100 Word Bigger Zombie Bites: An Undead Drabble Anthology Book 1.

No matter their name, one thing is for sure, they are the reanimated dead coming to get the living to feast on their delicious brains! We gave authors 100 words exactly to tell you stories that revolve around zombies and the humans fighting them to survive.

Includes my two stories, Fido, Fetch! and The Comedians by C.A. Verstraete 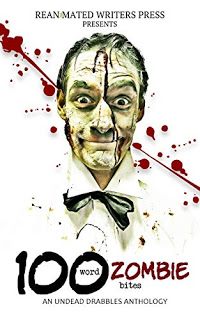 You can also get the first volume, 100 Word Zombie Bites: An Undead Drabble Anthology with my two stories, The Awakening and The Heist.

Posted by CA Verstraete at 4:46 AM No comments: 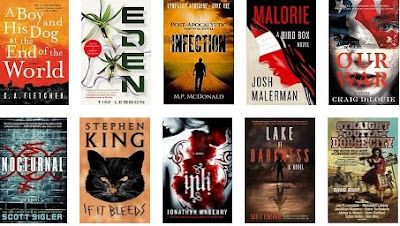 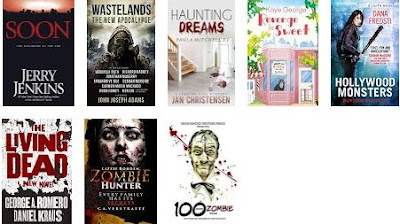 I was thinking of not doing any more book listings but... I can't resist. I love coming across new and upcoming books to read - despite the ever-growing to-be-read pile - and there are quite a few cool new releases coming out. So I hope you find something intriguing to read, as well.


See links on top tab for other great book lists.

A Boy and His Dog at the End of the World,  C.A. Fletcher - When his dog is stolen, hs owner goes across the ruins of the world to get her back.

Eden, Tim Lebbon - Earth's rising oceans contain enormous islands of refuse, the Amazon rainforest is all-but destroyed, and countless species edge towards extinction. Humanity's last hope to save the planet lies with The Virgin Zones, thirteen vast areas of land off-limits to people and given back to nature. A clandestine team of adventure racers are prepared for what confronts them. Nature has returned to Eden in an elemental, primeval way.  And here, nature is no longer humanity's friend. (From the author of the Netflix movie based on the book, The Silence.)

Infection: A Post-Apocalyptic Survival Novel (Sympatico Syndrome Book 1), M.P. McDonald -  Wth all the virus news, this seems a timely read... or too timely? 500+ reviews.
No one realizes there's a deadly illness spreading like wildfire until it's too late. With few symptoms, victims literally drop dead after a brief surge of energy. Within days, the virus tears through the population of the United States and the world. Can Cole convince his brother that the danger is real and that there's enough space for his family as well? And, can they all reach the island before the lights go out for them ... forever?

Malorie: A Bird Box Novel, Josh Malerman -  I enjoyed the movie and didn't realize there was a series. In book 2, Marlorie confronts the dangers of her world head on, where she and her children are blindfolded against the outside. Book 1,  Bird Box: A Novel, inspired the movie Bird Box with Sandra Bullock.

Our War, Craig DiLouie - The impeached President refuses to leave office and the land is wracked by civil war . A 10-year-old orphan looks how to survive in a militia camp in Indiana.

Soon: The Beginning of the End (Underground Zealot Book 1), Jerry Jenkins - 2004 Christy Fiction Award Winner.  Paul Stepola, an agent working for the National Peacekeeping Organization (NPO), has been assigned to enforce compliance with the world government's prohibition on religion. As Paul begins to unravel the truth about what he has found, events taking place around the world are starting to make sense. Something big is coming—something that can't be stopped. And it is coming soon.
Picked this up at the library book sale. I was hooked on the Left Behind series. I don't read most religious fiction as the stories are often weak, but this sounded interesting, so I thought I'd give it a try.

Wastelands: The New Apocalypse - Thirty-four stories answer the question, what would life be like after the end of the world as we know it? Whether the end comes via nuclear war, pandemic, climate change, or cosmological disaster, these stories explore the extraordinary trials and tribulations of those who survive.

Haunting Dreams, Paula Mitchell PI Book 4, Jan Christensen  -  Rhode Island PI Paula Mitchell's job is to find out what could be worse than the clam chowder when not one but two chefs get shot.

Revenge is Sweet, Kaye George, (Pre-order, releases March 10) -  Tally Holt opens a  new candy store with a vintage twist in a picturesque Texas town, but there's no sugar-coating a nasty case of murder.

Lilith - Hollywood Monsters, Dana Fredsti -  (Pre-order, releases April 21) Lee Striga is an actress, movie stuntwoman, and demon hunter in Hollywood, where supernatural creatures get all the best jobs People are vanishing without a trace, and clues lead to a legendary mansion famous for its horrible deaths--the location for Lee's next film job.


Nocturnal, Scott Sigler - Homicide detective Bryan Clauser is losing his mind. How else to explain the dreams he keeps having—dreams that mirror, with impossible accuracy, the gruesome serial murders taking place all over San Francisco? How else to explain the feelings these dreams provoke in him—not disgust, not horror, but excitement?
Meanwhile, a shadowy vigilante, seemingly armed with superhuman powers, is out there killing the killers.  And Bryan and Pookie’s superiors—from the mayor on down—seem strangely eager to keep the detectives from discovering the truth. And as Bryan learns the truth about his own intimate connections to the killings, he discovers that those who matter most to him are in mortal danger…and that he may be the only man gifted—or cursed—with the power to do battle with the nocturnals.

If It Bleeds, Stephen King - (Pre-order, releases May 5) Four new novellas taking you to dark places. The link doesn't have story descriptions, but the reviews hint at rats and the like... Always enjoyed King's novellas and short stories, so this will be welcome reading.

Lake of Darkness: A Novel, Scott Kenemore - (Pre-Order, Releases May 5) - An alternate history detective thriller, cosmic horror, and historical fiction where a Chicago Police Officer during WWI is called upon by legendary mayor "Big" Bill Thompson to investigate a serial decapitationist. Mysteriious murders and hints of something "other" take readers to the darkest places in Chicago’s dark history.

100 Word Bigger Zombie Bites -  (Releasing soon. Link coming.) The Reanimated Writers Group offers a second group of 100 word zombie "drabbles" by various authors. Includes my two new stories by C. A. Verstraete. (I'll have links on my website and here when they're available.)

A pair of medical examiners find themselves battling a dead man who won’t stay dead. In a Midwestern trailer park, a Black teenage girl and a Muslim immigrant battle newly-risen friends and family. On a US aircraft carrier, living sailors hide from dead ones while a fanatic makes a new religion out of death. At a cable news station, a surviving anchor keeps broadcasting while his undead colleagues try to devour him. In DC, an autistic federal employee charts the outbreak, preserving data for a future that may never come. Everywhere, people are targeted by both the living and the dead. We think we know how this story ends. We. Are. Wrong.

It's President's Day, so it seems like a good time to re-share some zombie fiction and some mystery fiction related to politics.  (Image: pixabay.com) 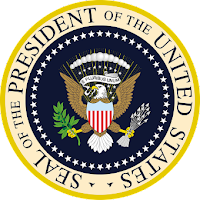 Stories are set from Edinburgh to the San Francisco Bay Area and points in between. Some are ripped from 21st-century headlines, others explore the challenges of women voting for the first time in Wyoming during the 19th century.

Zombie-In-Chief: Eater of the Free World, A Take on a Brain-Dead Election,

Scott Kenemore - Written around the 2016 elections, what happens when a reality TV star-tycoon wins for a good reason - so he can gorge on the brains of the living? Satire but oh-so-true take on politics and real life events. Truly original take on politics. 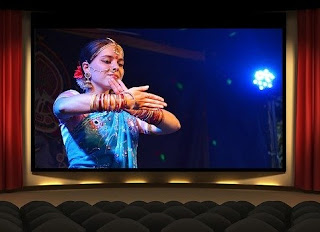 I admit I love Bollywood dancing and films. I remember watching them on TV years ago. Always loved the colors, costuming and especially the dancing. Every now and then, I go look some of them up on YouTube.

Recent movies like The Best Exotic Marigold Hotel and the sequel with Judy Dench reflected some of that feeling, if not the authentic thing.

I've read a few Bollywood-India based authors in the past and always enjoyed them. It's been a while, but someone mentioned an Indian author I hadn't read, so off to the library I went.

Well, I just found a favorite new author! I'm reading the books out of order, I realized, but that's okay. I just finished A Change of Heart by Sonali Dev and --- wow!!!  Suspense, a thriller, love story and a crime with writing as exotic and flowing as the colors of a beautiful silk sari. The lovely turns of phrases and imagery has my writer's heart melting!

The story centers on a heartbroken doctor, Nikhil, whose pregnant wife, Jen, also a doctor, was killed by a ruthless gang leader who's developed an underworld organ black market based on Jen's donor patient registry.

A woman who says she has Jen's transplanted heart and whose young son is in danger from this gang befriends the doctor in hopes of finding those records and protecting her son. It's a web of deceit and danger, all told with a rich background of Indian life and family. And yes, there's a wonderful ending... Just loved it.

Now I'm reading her book, The Bollywood Bride, which I realize is a previous book in the series. It tells the story of Nikhil, his cousin, Ria, a Bollywood star, her fiance Vik, and Jen... But since I just finished the other book and know the characters, I don't mind reading them out of order.  Just soaking in the flavor and colors, and looking forward to see where the story leads.

Posted by CA Verstraete at 9:10 AM No comments: