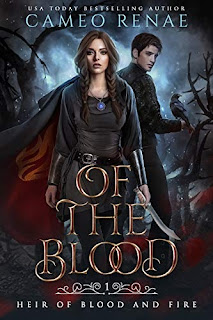 Today we welcome Cameo Renae, author of the new YA Dark Fantasy, Of the Blood...
One malicious prince. Two rival kingdoms. And an innocent girl caught in the crossfire.

Raised in a war-ravaged continent, temptation comes to Calla Caldwell in the form of a charming and mysterious stranger. Giving in to his intimate seduction, her world is forever changed by a single bite.Calla quickly learns the handsome stranger is vampire prince, Trystan Vladu. His bite was an attempt to claim and save her from a plot of vengeance generations in the making. However, the claws of that ancient vendetta are scraping ever closer.Thrust into a new nightmare by the Prince of the corrupt kingdom of Morbeth, Calla is captured, tortured, and starved in the dank confines of his dungeon. While in captivity, she takes part in a séance with a witch of light where she contacts a departed relative—a Princess of Incendia—who bequeaths a gift to Calla that will tip the scales of good and evil . . . if she can learn to harness it.With a dark tapestry of secrets, lies, and murder unraveling around her, Calla must learn to embrace the power roiling through her veins, or be snuffed out by the strangling fist of a malevolent darkness.
Posted by CA Verstraete at 12:00 AM No comments:

Email ThisBlogThis!Share to TwitterShare to FacebookShare to Pinterest
Labels: dark fantasy, YA

About the Book: The year is 2043. Flesh-eating monsters are real, militia duty begins at 16, and the contenders in the fight ring are the new rock stars of the world. Twenty-year-old Kit O'Brien grew up as an orphan in a survivor camp, fighting alongside the militia to keep the last of humanity alive. But as the final vestiges of the infected die out, bloodthirsty raiders soon become a bigger threat - and while the militia's attention is diverted outside, Kit discovered something much worse lurking within the walls of their camp. Kit must stay alive long enough to unmask the one behind this new threat. If she fails, she won't just lose her home, but her life.

** Enter Giveaway for an ebook or print book (US shipping only). Send comment about what you like about zombies with header - Kit's - via contact page here.  Open to 5/22/20.

Shots. Shouting. Surrounded on three sides. Eric orders stay in formation, but I can't. Cut off from my team, I retreat into a side room.

Sean hollers four near him. Two follow me into a sitting room, and I shoot one then aim at the other. The one that was already in this room comes at me, growling and working its jaw. A long flap of skin dangles under its chin like a turkey waddle. I get my second target while holding off the third with my bow pressed against its mouth. It shoves on my bow, its momentum pushing forward, and we crash to the floor. My compound bow is all that's between me and its teeth. My funny bone hits hard on the floor and my gun flies out of my hand.

What inspired you to write a zombie book?

I love the zombie genre and post-apocalyptic survival stuff. And while I devour the action scenes, it’s the people and their mental/emotional realities that really draw me in. It’s the process of how we view the zombies as the ultimate monsters, until we watch the humans de-evolve and become more menacing than any mindless, shuffling creature. I can forgive the zombie for being a zombie, even as I fear them, but I can’t forgive the survivor who turns on other people.

How did ou choose your time frame?

So, why did I set my story twenty years after the apocalypse event? Firstly, I didn’t want to rehash the classic zombie apocalypse tale. (Not that there’s anything wrong with those—like I said, I’m a fan of the genre.) Rather, I wanted to explore: How do people survive to get to that point? How do they live their day to day lives? How do they deal with the zombie virus, still affecting the world?

I formed the idea for this book while watching an episode of The Walking Dead—date night for my husband and me. There was a flash-forward scene several years into the future that set my imagination flowing. What would survival look like in twenty years with no or little electricity, no commercial or political infrastructure, and no legal systems to govern behavior on a large scale? What new rules or functions would arise?

What research did you do for your story?

I not only studied post-apocalyptic survival, I looked to history to examine the way groups of people, those with a knowledge of a functioning society, adapted to isolation. This included explorers, sailors on long sea voyages, and people from ‘back east’ moving west into the American territories, evolving into settlers and cowboys clustered together in small towns. How did they get by without being able to count on regular deliveries of supplies, huddling in small groups, always wary of the stranger come to town? How did people trade and barter with limited access to a monetary system? What if they had no goods to barter? What then?

In Kit’s Rebellion, the people of this post-apocalyptic, zombie-infested world survive by grouping into camps of smallish numbers, set at least twenty miles or more apart. Without a food supply chain, an infrastructure, or technology, they must work the land and hunt game. Larger populations squashed into one area would quickly deplete resources. The virus is still active in Kit’s world, and as a member of her camp’s militia, she knows how to kill zombies, but raiders and/or other humans intent on pillaging, are also a threat. Those raiders are more feared than the zombies.

When the threat to survival moves from outside the camp to inside the very walls meant to protect her society, the stakes become life or death. Kit would take on any enemy to protect her home, but when her camp’s governor gives in to his base nature and leads the camp on a violent path, she must choose. Loyalty and obedience to the people who gave her shelter as an orphaned baby, raised her, and gave her a chance at life, or rebellion to follow her own conscience about what is right and decent. What will Kit do? Read to find out.
Posted by CA Verstraete at 12:00 AM 4 comments:

Totally forgot about this interview...I like how they did the video and put the questions with it...
@ The Horror Tree

It's what you don't see coming that kills you... 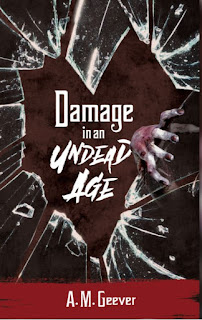 Damage in an Undead Age by A.M. Geever releases on June 16th!

It's what you don't see coming that kills you.

Safely hidden from San Jose’s City Council, Miranda Tucci has begun to believe that life can be good again. Reunited with Mario, and accompanied by her best friend Father Doug Michel, she has undertaken a hazardous journey to the Pacific Northwest. There, the trio of friends hope to recreate the vaccine for the zombie virus.

But danger still lurks in what used to be civilization, and hearts can still be broken. If Miranda lowers her guard enough to nurture a small, soft dream, can she risk losing it without losing herself? And with the ravenous undead always in pursuit, can she stay alive long enough to see it come true?

"A virus, a conspiracy, romance, and zombies. A.M. Geever combines the old standbys to give us a compelling new story you won't want to put down!"

- SARAH LYONS FLEMING, AUTHOR OF UNTIL THE END OF THE WORLD and THE CITY SERIES
Posted by CA Verstraete at 12:00 AM 2 comments:

Making the rounds! It's been going around Twitter now for a while! 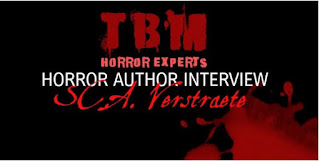 #horror #zombies and all that!

Got a new interview up at The Bold Mom, read it here.

Fun as she even included my spooky dollhouse photos! Hey, we all find our inspiration in different places! I love Halloween miniatures! 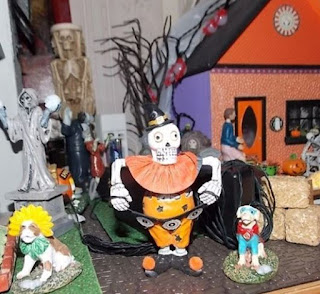