This is being billed as the Rick Grimes story.... I sure hope it's more decisive than how he handled Negan...? But it'll be good to have more perspectives on the story....

I don't see a release date, but see more info at BuyZombie.com.

Today I welcome USA Today Bestselling Author Jean Rabe to the blog to share about her latest, The Dead of Summer - the third book in her Piper Maxwell mystery series. (Isn't the cover great?) 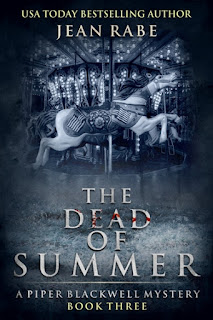 Shouts of delight turn to screams of terror when a carnival ride goes berserk at the Spencer County Fair. Sheriff Piper Blackwell must contain the chaos and investigate the possible sabotage, even as she tries to solve a local businessman’s horrific murder.

But managing two investigations with at least one killer on the loose pushes the young officer and her tiny staff to their limits. Can Piper catch the murderer, or will the summer’s body count continue to rise?

* Get more news, tidbits about her upcoming books, reviews of what she's reading, and writing advice.  ** Subscribe to her newsletter here. ** And.... check out the cool giveaway at the end of this post.


What inspired the book?

I love summer, and so I had to have a Piper book set in the summertime. I love everything about summer—even the heat. But what inspired the book was a trip to the local county fair. I’d bought tickets to the country concert, which started at 7 p.m., but I thought I’d go early and people-watch. I took a notebook, bought a BIG lemonade, sat at a picnic table and wrote down descriptions of people, their dialog, and added in all the sights, sounds, and smells. I basically drank in the summer. The picnic table was at the edge of the rides, so I watched them and took pictures. Then I asked “what if?” I’m always asking “what if?” as a springboard to a story.

What if one of the rides broke?

One of those big, fast aggressive rides?

Would people fly through the air to their doom?

So that’s how The Dead of Summer starts, and Piper is thrust into dealing with an awful disaster in a small county.

How is Piper different this time?

Piper has matured, even though she’s still twenty-three. (She’ll have a birthday in Piper #4.) She’s more comfortable in her role as sheriff. She’s hit the six-month mark, is enjoying the job, and her staff is more accepting of her. She’s stopped thinking about returning to the army and she’s started to sink her roots deeper into the county soil. She has her own house (a nice one she inherited), and her love life is kicking up a notch. And she wants to be an even better sheriff … Piper is studying the detective she hired away from the Chicago Police Department. She realizes she can learn a lot from the man.

What was your favorite part of the story and why?

I liked sprinkling in my geekdom. I am a geek and a gamer. I collected comic books, played collectible card games, and visited a lot of shops similar to the one I detail in my book. Actually, the shop in the book is a meld of Calinbus, a comic shop I went to when I lived not terribly far from Owensboro, Kentucky, and Gopher Mafia, a game store I go to regularly now. Some of the customers in the book are based on folks I knew from “back in the day” or that I’d seen recently at local game days. It was fun putting bits of me into the book. I put in lemonade, dogs, and country music … those are bits of me, too. 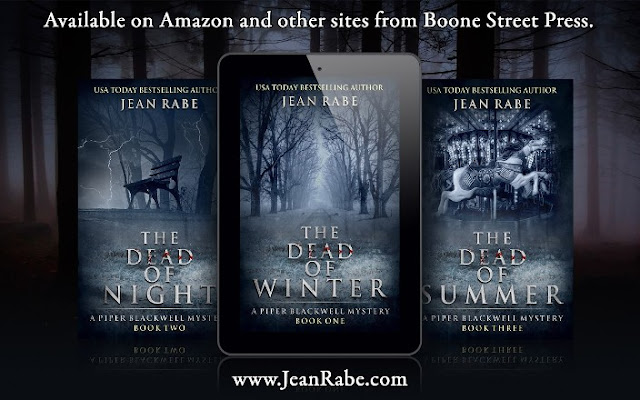 What kind of research did you have to do this time?

I always do a lot of research on my mysteries because I want everything “just right.” I regularly talked with a county prosecutor … who happens to be our Dungeon Master, to make sure all the legal stuff was authentic. And a former cop, who was also a gaming buddy, is always instrumental in helping me with the police procedural part. I am fortunate to have such knowledgeable friends. Without giving away the plot, I learned why you might not charge someone with a crime, even though they did something awful; why local law enforcement is responsible for any charges stemming from big accidents at fair grounds; what all the US Marshal’s office handles; and who inspects carnival rides. And I watched several documentaries and biographies about the Mob. I also researched rides that have broken around the country.

What did you find out that was unusual?

That the Indiana Department of Homeland Security is responsible for inspecting carnival rides. Interesting, eh? They have a division called Elevators and Amusements, and they inspect rides, elevators, ski lifts, and the like. They visit hospitals, schools, grain elevators, amusement parks, water parks, and ski resorts to conduct their work. Some states will rely on inspections from other states when a carnival moves its rides across the border. Not Indiana. Indiana inspects everything fresh. Interesting.

What was the best moment of writing this Piper book and why?

I’d say it was a little scene out on the county road. Piper stops on her way home. It’s late at night, and there’s nothing but the road and a big field. No light pollution from nearby farmhouses. There are myriad stars and thousands of lightning bugs hugging the crops. Nature’s fireworks. I used to live out in the country and at night I’d go out on my deck in the backyard and just watch nature’s fireworks. Me and my dog. My husband and some of our friends thought it was boring. I considered it pretty close to heaven. Writing that scene in The Dead of Summer took me back to that time in my life. I was missing all of those Wisconsin lightning bugs … so I put them in my book.

* See more tomorrow at the Between the Lines blog. You can follow all the stops here.

Excerpt from The Dead of Summer:

Oren stayed outside and peered in through the front window, seeing neat rows of shelves and a center table with comic books arranged like records used to be displayed “back in the day.” Easy to look through them, he figured. Piper and Alden went inside.
He turned and looked out across the lot and down the front of the strip mall, noting two other surveillance cameras … one in front of a Dollar General, the other at a hardware store, neither at an angle that would catch the front of Silver Age Sam’s, but both of which might still be useful. The sidewalk that stretched across the entire front of the mall was chipped and cracked and decorated with fast food wrappers that hadn’t come from this area—Oren had noticed a lack of restaurants in this vicinity. His stomach snarled. A top-heavy woman in hot pink leggings and a black tank top came out of the beauty supply store, carrying a curly brown wig on a mannequin head. An obvious father and son strolled out of the hardware store, each carrying two paper sacks. They headed toward an old red pickup, put the sacks inside the bed, then not worrying about thieves, turned around and went to the Dollar General.
He continued watching, wanting to get a feel for the area. It seemed safe and aged. He’d been to Owensboro more times than he cared to think about, had his father in a nursing home here that called itself a “memory care center.” If he’d been by this strip mall on one of his trips, he couldn’t recall—not the sort of shops he’d stop at. He saw a thin woman in a yellow sweater—how could she be cold today?—shuffle toward an Edward Jones office on the far side of the beauty supply place. She wasn’t old, fifties maybe, but she leaned on a cane, hadn’t gotten out of a car that he’d noticed. Maybe she’d come from a nearby bus stop or been dropped by someone; and if the latter was the case the driver could have been kind and let her off at the door.
Oren sighed, decided he’d go make sure she got to where she was going. But he stopped when a gangly boy toting a backpack ran toward her and gallantly extended his arm. The boy walked slowly with her. Maybe she was more than in her fifties, and maybe the boy was a grandson.
In front of the hardware store two kids rode bicycles that looked too small for them, thick wheeled dirt bikes, one so bright blue it was likely fresh from the shop. The other was a burnt orange, caked dirt on the rims, playing cards hooked to the spokes so they clacked. Oren had done that when he was a kid, but he’d used baseball cards—players from 1959 and 60—that would probably have brought a good piece of change had he left them in the pack. He remembered using a Yogi Berra card, from when he was a catcher with the Yanks.
Oren shifted his attention to the far corner of the strip mall lot. An older gentleman—Oren chuckled at calling anyone “older” when he, himself, was an “older gentleman”—ambled up an aisle between cars. Oren changed the label to geezer; stoop-shouldered, head forward bringing to mind the image of a pigeon walking, drab olive pants and a striped sport shirt, walking aimlessly. The man turned a corner and started down another aisle, made it to the end, and then turned up another, this one the closest to the comic store. Maybe he suffered from dementia, like Oren’s father, couldn’t remember what car was his and thereby shouldn’t be driving. As he neared the comic shop, Oren got a better look. His sport shirt was partially unbuttoned, revealing a ropy scar likely from some sort of open heart surgery. He wore expensive-looking athletic shoes and had an overlarge Fitbit on his wrist that he occasionally consulted, designer eyeglass frames, and a couple of thick gold rings on one hand.

When she's not attending game conventions, USA Today Bestselling Author Jean Rabe writes - a lot. She's written 40 SF, fantasy, mystery, and adventure novels (including a couple of ghosted projects), more short stories than she cares to count, along with editing magazines and anthologies.

Right now it’s all about mysteries…thrillers, suspense and uncozy-cozies. She says she had to change genres from SF and fantasy "’cause her feet were itching again and I needed to do something different."  Learn more about her and her books at her website.