I'm usually late to the party, so this may be old news to some and hopefully new to others.

I'd seen the trailer to the movie Cargo a while ago and finally got to see the film itself.

Wow!  The zombies were scarce in the film as it's more a personal story about the lengths a father goes to protect his daughter, but it makes it no less worth watching.

The zombies, when they come on scene, are as awful as you'd expect. The difference here is it is a slow, agonizing transformation until there is no return.

What makes this movie refreshing is the setting. It is set in the Australian outback and involves the native Aboriginal people. There is a clear message here showing the native population as the heroes when a girl the father rescues ends up finding her family again and saving the man's daughter. I won't give away the main plot points to avoid spoiling the story for others. But it's a heartwarming story and well worth watching.

Lizzie Borden is a person that continues to fascinate and is always open to new interpretations. But as often happens, the hype doesn't always match the end result. 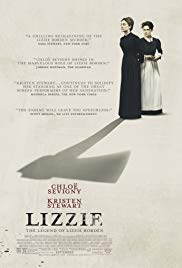 I'm always behind everyone else, so I just watched the recently released Lizzie movie with Chloe  Sevigny as Lizzie and Kristen Stewart as Bridget Sullivan.

Well. It's nothing new really. The movie focuses on the rumored relationship between Lizzie and Bridget suggested by a lot of gazing and staring. There is one scene with the two of them together in the barn - and then the creepy Father staring in the window, Ugh.

The movie does give the impression of this being one dysfunctional and creepy family. Uncle John is having money problems, Father is strict, overbearing and something of a pervert who's visiting the maid at night. The whole household is full of mistrust. 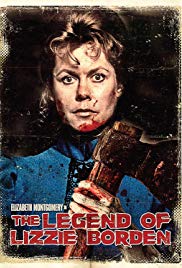 Then there is the enduring theory/rumor that no traces of blood were found on Lizzie since she committed the murders in the nude. Except this time, there is the added twist of getting Bridget in on it. An excuse to have both of them au natural I say. (Elizabeth Montgomery in the original 1975 movie, The Legend of Lizzie Borden did it better, I say, with only a bare shoulders shot and nothing gratuitous for the sake of showing nudity.) 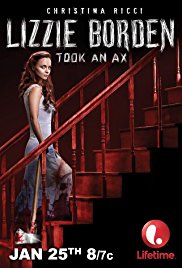 Except for the axing scenes in the new Lizzie, which were gory and played for the shock value, overall, the movie was rather.... blah. I'll take the excitement, horror and attitude of Christina Ricci's 2014 Lifetime movie,  Lizzie Borden Took An Ax.

And if you want another take on the murders, what if Lizzie Borden
killed her parents for an entirely different reason? How about if they'd become... zombies? Check out my book, Lizzie Borden, Zombie Hunter.
Posted by CA Verstraete at 12:00 AM No comments:

Here's a great list of King's River Life Magazine's Best Books of 2018 by its reviewers.

It's January (despite it being in the 50s in the Midwest!) and I have a baker's dozen-plus of new reads in various genres that look intriguing, so fire up that Kindle or get a print copy and dig in!

Hellhole: An Anthology of Subterranean Horror, Jonathan Maberry and others - Legends tell of a hollow earth below ours - what if they're true? Includes Maberry's new Joe Ledger story, plus:
Introduction by James A. MooreAll the Devils are Here- A Joe Ledger/Lizzie Corbett Adventure by Jonathan MaberryThe Devil's Throat by Rena Mason - A Plague of Locusts by Michael McBridePit of Ghosts by Kirsten Cross - Where the Sun Does Not Shine by Paul ManneringGuard Duty by SD Perry - Black Lung by Aaron SternsThe Offspring by JH Moncrieff - Ginormous Hell Snake by Jake BibleGhosts of Hyperia by Jessica McHugh -He Who Fights by Sean Ellis

Includes: Bubbe’s Nightingale by Roberta KaganCatriona’s War by Jean Grainger - Reluctant Informer by Marion KummerowKilling the Hangman by Ellie Midwood - The Moon Chaser by Alexa KangEnemy at the Gate by Mary D. Brooks - The Occupation by Deborah SwiftCode Name Camille by Kathryn Gauci - V for Victory by John R McKaySound of Resistance by Ryan Armstrong*** All proceeds will be donated to the United States Holocaust Memorial Museum In Washington DC ***

Bird Box:  A Novel, Josh Malerman - This originally came out in 2014, but as everyone is talking about the Sandra Bullock movie, I thought readers would be interested. Something is out there... something that must not be seen. Engulfed in darkness, suspense interweaving past and present, a mother is trying to raise her two children in a world where hearing is foremost and sight is not possible.

Shattered Lives: Becoming Henry, Issue #1, This Must Be the Place, Rissa Blakeley - Cool idea! Comic version of the author's post-apocalyptic book series, Shattered Lives. Violent nightmares, a haunted past... Luke and others selected by government recruiters finds who he can trust - and fears what will happen to the one person he confides in.

Throne of Deceit: An Epic Fantasy Adventure (The Wicked Crown Book 1), K.N. Lee - (Releases Jan. 31) Elise was born a bastard. But, as the daughter of the king, her life has never been ordinary. The king is mad, and the entire country of Kova knows it. Having a wizard on the throne tends to keep his subjects quiet and submissive, but when he dies, the line of succession points directly to his illegitimate daughter......the one who killed him.

The Primal Series, Monique Singleton - Immortality comes at a high price. Her sanity.
Known simply as subject 336, she was the unwilling subject of sinister and brutal experiments designed to replicate her enormous strength, healing powers, and apparent immortality. It didn’t work that way. They unleashed her primal nature. 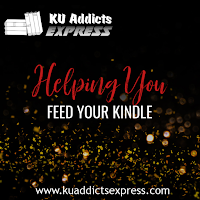 ** Favorite genre KU books delivered to your inbox daily. Just tell us your favorite genres, and we'll do the rest! Sign up here. Check out the website for more info! 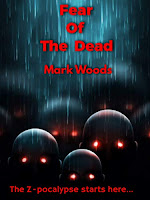 Arize: Resurrection, Book 1, Scott Nicholson - A long-dormant virus releases from an archaeological dig in Alaska. The survivors turn to a charismatic, apocalyptic preacher and soon find he is far from he appears as they are caught between the devil and the living dead. Fear of the Dead, Mark Woods - Survivors fight for survival, but find the odds (and the dead) are stacked against them...

Lizzie Borden, Zombie Hunter, C.A. Verstraete - What if everything you think you knew about the infamous 1892 killings by spinster Lizzie Borden wasn't true? What if she had another darker and more horrifying reason to kill?

Dark Water Rising, Sharon Sala - (Releases Jan. 29)  A hurricane is looming, two prisoners have escaped and when Sam’s phone rings with his ex-wife’s number, he immediately remembers the card he gave her when they parted on the courthouse steps. If you ever need me, call and I’ll be there. She hasn’t called in three years, and Sam is sure this can mean only one thing: Haley is in danger, and it’s up to him to save her.

Happy Reading!!
Posted by CA Verstraete at 12:00 AM No comments: