I like to read in all genres, and if you're a writer, it's always good to see what someone else is writing.

Here's a list of great stories published by the Saturday Evening Post they listed as their year's Most Popular Contemporary Fiction. Included is prolific short mystery writer John Floyd's story. Be sure to check them out.

Have a great new year! Hope you have health, great publishing and other successes,,  and peace in 2019!

Hope you enjoyed my Eight Days of Christmas Reads. You can see the whole list on the pages tab at the top of the blog or on the Day 1 post.

Hope you and yours have a wonderful Christmas and a great New Year. Wishing you any other holiday greetings as well! Stay tuned for more posts later and some new direction in the new year!

All animations are from https://www.fg-a.com/
Posted by CA Verstraete at 12:00 AM No comments:

A Merry Christmas Eve to all!

I'm sure everyone is busy celebrating, but if you have a break or quiet time here are a few other holiday reading suggestions.

This time, I've included a few "darker," Gothic and ghostly-type reads that looked interesting. Maybe you'll even want to stage a short Christmas play between the Egg Nog and gifts?

A Gothic Christmas: A Collection of Three Stage Plays, G.R. Linden - Demons, vampires and grizzly takes on that traditional Christmas.

Dark Celebration: A Carpathian Reunion, Christine Feehan - Noted romance author brings Christmas to the latest in her seductive vampire series. as the prince of the Carpathians fears he can no longer protect his species from extinction by their immortal enemies.

Ghostly Winter Tales: A Fourth Collection of Ghostly Stories for Christmas - Collection of 23 ghostly Victorian and Edwardian stories of macabre mischief and the supernatural, some reprinted for the first time since their original publication. 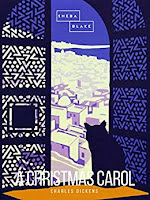 Miss Marley: A Christmas Ghost Story, Prequel to A Christmas Carol, Vanessa LaFaye - Orphans Clara and Jacob Marley live by their wits, scavenging for scraps in the poorest alleyways of London, in the shadow of the workhouse. Every night, Jake promises his little sister ‘tomorrow will be better’ and when the chance to escape poverty comes their way, he seizes it despite the terrible price.


And so Jacob Marley is set on a path that leads to his infamous partnership with Ebenezer Scrooge. As Jacob builds a fortress of wealth to keep the world out, only Clara can warn him of the hideous fate that awaits him if he refuses to let love and kindness into his heart… In Miss Marley, Vanessa Lafaye weaves a spellbinding Dickensian tale of ghosts, goodwill and hope – a perfect prequel to A Christmas Carol.
That, of course, leads to the classic story of  Christmas ghosts, greed and redemption in A Christmas Carol by Charles Dickens.

On the seventh day of Christmas, my true love gave to me...

It amazes me sometimes what is a book category! Yes, there are Christmas Horror - and Zombie -  Coloring Books! Get out those crayons, paints and markers! 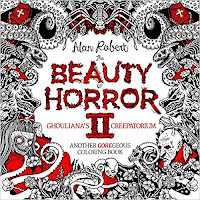 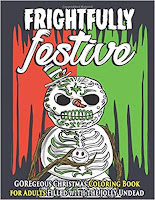 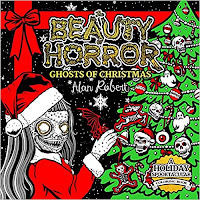 The Beauty of Horror: Ghosts of Christmas Coloring Book - Alan Robert -Ghouliana sinks her fangs into the North Pole. 64 pages 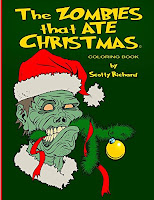 The Zombies that Ate Christmas - 24 pages.

I've also included a few other Christmas coloring books that I thought looked interesting and had pretty designs. 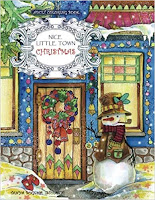 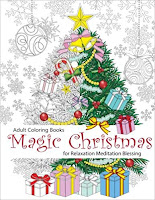 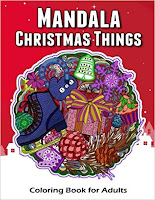 
On the sixth day of Christmas, my true love gave to me.... 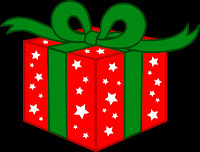 Collected Christmas Horror Shorts 2 - (Recently released!) More tales of not-so-happy Christmases, the ones they don't tell you about in the movies and songs...

Merry Krampus Anthology - from Gothic Bite Magazine. (Recently released!) When Krampus appears at Christmas, the legendary creature won't be bringing gifts. A little history across cultures and some Krampus tales of holiday terror.

The 12 Terrors of Christmas: A Christmas Horror Anthology - Claudette Melanson, Lynn Lamb and others - Twelve terror stories of Christmas, vampires, ghosts, a rampaging Krampus and more.

The 13 Frights of Christmas: The Horror Authors' Carnival -  (Recently released!) Jingle My Bells and you'll attract the wrong kind of attention.. and more.  ** Proceeds benefit the David Sheldrick Wildlife Trust, A Haven for Elephants and Rhinos.**

On the fifth day of Christmas, my true love gave to me...

This is interesting... there's a whole series about a Sci-Fi Santa universe, evil elven, Jack Frost, what an idea! (It also says that after book 1, they can be read in any order.) 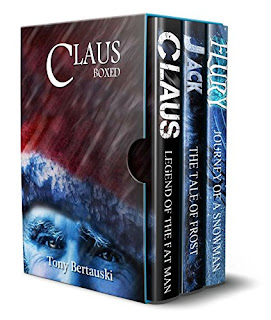 Claus Boxed : A Science Fiction Holiday Adventure, (CLAUS, JACK, FLURY), Tony Bertauski - In the early 1800s, Nicholas Santa discovered an ancient race of elven. Short, fat and hairy, they have lived peacefully on the North Pole since the Ice Age but Nicholas is quickly swept into the colony’s first and only fracture. The elven known as the Cold One has divided his people. His name is Jack. And Jack’s tired of hiding. Why should they live in a shrinking ice cap when humans occupy the rest of the world?

There’s no stopping Jack from world domination until Nicholas Santa, the only human to enter the elven colony, joins helium-bladder reindeer, artificially-intelligent snowmen, and a merry band of big-footed elven to bring peace back to the North Pole. And becomes a legend.

* Claus: The Legend of the Fat Man, Book 1 was listed as free at time of writing.

* Jack: The Tale of Frost, Book 2   The Jack Frost you never knew…Sura is sixteen years old when she meets Mr. Frost. He’s a strange man. Very short, very fat. And he likes his room cold. Some say inhumanly cold.

Mr. Frost’s love for Christmas is over-the-top and slightly psychotic. He’s made billions of dollars off the holiday and, according to Mr. Frost, a holiday he invented. Rumor is he’s an elven, but that’s silly. Elven aren’t real. And if they were, they wouldn’t be in South Carolina.
Sura takes a job at Frost Plantation that’s strange and magical and, for the first time in her life, a place where she feels like she belongs. She’ll uncover the mystery of what really happens at Frost Plantation and who’s making all the toys. She’ll discover the biggest secret of all—Mr. Frost hates Christmas. Really, really hates it.
* Flury, Journey of a Snowman, Book 3 - Life hasn’t been kind to Oliver Toye. As if juvenile diabetes isn’t enough, he’s forced to live with his tyrannical grandmother in a snow-bound house. He spends his days doing chores and the nights listening to the forest rumble.

But when he discovers the first leather-bound journal, the family secrets begin to surface. The mystery of his great-grandfather’s voyage to the North Pole is revealed. That’s when the snowman appears. Magical and mysterious, the snowman will save Oliver more than once. But when the time comes for Oliver to discover the truth, will he have the courage? When Flury needs him, will he have the strength? When believing isn’t enough, will he save the snowman from melting away?

* Continue the series in Claus Boxed 2.  Stories you never heard growing up.  (Links below are to single books)

Eb Scrooge is left to run Avocado, Inc., an innovative technology business, all alone. An introverted shut-in locked away in a Colorado mansion, only his servant droids keep him company. Until the gifts arrive.

When Kandi’s dad gets a mysterious call, they fly to a tropical island. Despite the heat, his sunburned client wears a heavy cloak. The world doesn’t know it yet, but Santa Claus is missing. Kandi knows where he is.
RONIN , The Last Reindeer- Book 6
There's one Christmas story no one has ever heard, the legend of the biggest and baddest reindeer of them all, the one who leads the sleigh and protects the herd. Billy Big Game doesn’t want to discover the last reindeer. He wants to capture him.

On the fourth day of Christmas, my true love gave to me...

How does the leader of a failed zombie civil rights movement from California rescue a group of his undead brethren and help a lonely Breather girl as he hides from a band of medical researchers while disguised as Santa Claus?

On the third day of Christmas, my true love gave to me...

Hark! The Herald Angels Scream - Christopher Golden, Seanan McGuire and others - Eighteen short tales of Christmas horror sure to make the season frightful.


On the second day of Christmas, my true love gave to me....

A Very Zombie Christmas: An ATZ Special - Michelle Kilmer, Jeffrey Clare and others. Over 30 holiday short stories with a twist.

Lizzie Borden, Zombie Hunter series and The Haunting  of Dr. Bowen
Posted by CA Verstraete at 12:00 AM No comments:

Time has crept up on me! Last minute I am, but I've included a list of different books for this week of pre-Christmas. I'll have some great holiday stories, anthologies, and more, so stop by each day! (Wait'll you see the cool Santa series I came across and some other fun books!)

Let's see what I can find that's horror, zombie, monster etc. related to tie in with Christmas...

Yes, there are actually books with Christmas and zombies... not sure whether that's a good idea or not, but if you feel adventurous...

A Zombie Christmas: Jingle Some Bells and Empty Some Shells - Three men risk life and limb in a zombie apocalypse to bring happiness to surviving kids on Christmas morning.

** And if you want something not Christmas-related try my...