Where do Monsters Go To Seek Justice? #paranormal The Love-Haight Case Files 2 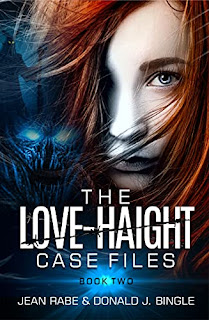 Zombies, Monsters & Others, Oh MY!

The Love-Haight Case Files 2 by Jean Rabe and Donald J. Bingle offers "other-than-humans" justice and representation. All kinds of monsters here - even a talking gargoyle with "tons" of personality! Check out the excerpt and the giveaway below!

The Love-Haight Case Files Continues...Book two of the award-winning series is out: no matter if it creeps, crawls, or skitters--the law isn't for the squeamish. http://mybook.to/LoveHaightBk2

Supernatural beings are willing to fight for their legal rights!Since the Summer of Love, the Haight-Ashbury district of San Francisco has been known for attracting weird and unconventional souls, but things got even stranger when the monsters moved in. Magic has returned to the world and with it a host of supernatural creatures—not just vampires and ghosts, but sentient gargoyles, ghouls, sprites, faeries, and more. The frightened citizenry, holier-than-thou bigots, headline-seeking reporters, and harried police refer to them as OTs (Other-Than-Humans), but Thomas Brock and Evelyn Love believe even supernatural creatures have legal rights. Delve into their case files for a genre-bending mix of mystery, horror, suspense, thrills, courtroom drama, and romance. The city’s OT element is sometimes malevolent, sometimes misunderstood, and often discriminated against. Brock and Love represent them all, dead, undead, or alive—whatever the case, whatever the species.

Excerpt from The Love-Haight Case Files 2:

The woman was shapely and fit, had the appearance of an athlete, likely college-aged. She’d been reading something on her phone, but stuck it in her pocket and sat up straight as Evelyn settled across from her.

“Need me to translate, Evelyn?” Pete called from behind his computer.

“English,” Angela said. “I can use English. Sorry.” She put her elbows on the table and interlaced her fingers under her chin. “Fria. It’s chilly in here.” She was dressed in tight red jeans and a peach crop top, a red jean jacket draped over the chair behind her had rhinestone trim.

“Sorry. It’s fine. Fine. I get nervous, worked up, and the Spanish comes out. My English is fine. Listen, you’re defending that watery tramp, right? The Rusalka—”

“Yes, we’ve taken her case.” That was public information; Evelyn wasn’t confiding something she shouldn’t.

“Policia. I’ve been to the police, talked to a detective. They took my statement, said the DA would contact me. But I had to come here, too.”

“—a puta. Ladrona. Mentirosa. Asesina. Murderess. You’re defending a water-breathing murderess. I’m sure she killed Nat. I know she did. I didn’t see anything, but I know. I know she did it and—”

Evelyn laid the pen across the pad. “We’re defending her, Miss—”

“Want?” Angela dropped her arms to her sides. “I want you to quit the case. I’ve read about you. Well, you and that ghost lawyer Brock. I’ve read that you’re very good and you get OTs off, defend OT rights and—” The young woman’s brow creased in ire. “I want you to drop the whole case. That soggy gold-digging bimbo killed Nat and she needs to pay for it. She needs to fry like a piece of cod on a Friday night.”

USA Today best-seller Jean Rabe's writing career spans decades, starting as a newspaper reporter and bureau chief to director of RPGA and a co-editor with Martin H. Greenberg for DAW books. She's the award-winning author of more than forty science fiction/fantasy and murder mystery thrillers. She writes with dogs tangled at her feet, because life is too short not to be covered in fur. Find out more about her at www.jeanrabe.com, on social media, or sign-up for her newsletter here: https://jeanrabe.com/sign-up-for-my-newsletter/.

*** New to the Love-Haight Case Files? Check out the rest of the series: http://mybook.to/LoveHaightSeries 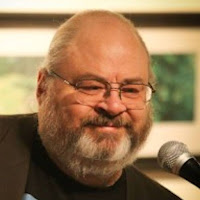 Donald J. Bingle is the author of eight books and more than sixty shorter works in various genres from horror to the underworld of assasins with the Dick Thornby Thriller series (Net Impact; Wet Work; Flash Drive). His murder mystery,    Frame Shop, is a darker take on the suburban writers’ group. ,  He also is the editor of Familiar Spirits, an anthology of ghost stories. Find more about Don and his writing  at www.donaldjbingle.com and on social media. Sign-up for his newsletter here: https://www.donaldjbingle.com/newsletter-sign-up

What I'm Reading Next: 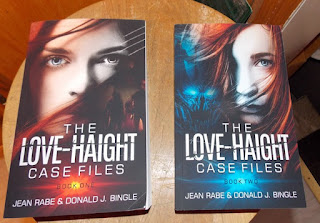 Love the covers on these! Just released on Kindle too:

Book 1: Supernatural beings are willing to fight for their legal rights!

Since the Summer of Love, the Haight-Ashbury district of San Francisco has been known for attracting weird and unconventional souls, but things got even stranger when the monsters moved in. Magic has returned to the world and with it a host of supernatural creatures—not just vampires and ghosts, but sentient gargoyles, ghouls, sprites, faeries, and more. The frightened citizenry, holier-than-thou bigots, headline-seeking reporters, and harried police refer to them as OTs (Other-Than-Humans), but Thomas Brock and Evelyn Love believe even supernatural creatures have legal rights.

Book 2:  With the return of magic to the world, how will the law evolve? Evelyn Love and Thomas Brock love the Haight-Ashbury district of San Francisco, love the law, love representing the rights of supernatural OTs (Other-Than-Humans) who accompanied the return of magic to the world, and just might love each other, even though Thomas is a ghost. But with discrimination against OTs on the rise and the entire law office staff living under threat of death or worse, the cases are darker, the mysteries are murkier, the clients are more desperate, the stakes are higher, and the parallels to the real world are even more compelling. 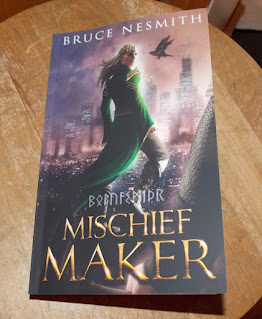 Mischief  Maker, A Norse Mythology Contemporary Fantasy, Bruce Nesmith - What if Loki was never the bad guy? Loki, once a god, now nothing more than a stage magician in modern-day Chicago…But his enemies from a thousand years ago have long memories.

Victors wrote the history, and Loki was blamed for the sins of the Norse gods. They can’t let him live in peace.He has to set aside his new life to settle old grudges while coming to terms with what it means to be a man.And a god. If Loki fails, the nine realms will fall.

Posted by CA Verstraete at 5:52 AM No comments:

What Are You Reading? I'm Reading... #pandemic #king #apocalyptic 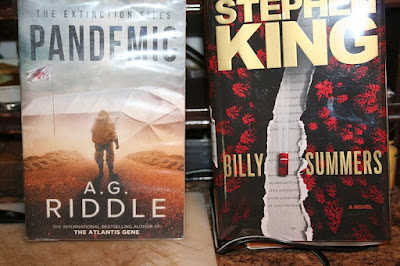 I have a bunch of different book posts that will be coming up soon. But for now....

Funny that the two books that come in the same time at the library are also the two largest....

(** Added: Finished Billy Summers - this has to be the best King book I've read in a while. No padding, no pages to skip over, great characters and twists. Really enjoyed it!!)

Pandemic  sounded good when I looked at it online. Well, reading this stuff is usually way better than real life. ha! And this has an incredible 6,400+ reviews since 2017. And King, well, being a fan, I try to keep up, though I admit a preference for the horror. So, we shall see!

Anyone read either? We'll see how it goes!

Posted by CA Verstraete at 12:29 PM No comments:

Photo: A "little" hint! This is only part of the cover!

Hey great news! I'd been working on this story for a bit and it took a while to get word back on it - but I have a new ZOMBIE story coming out soon!  And no, this time, it isn't Lizzie Borden related at all. A slightly different kind of story for me.

** PS - New fall and Halloween reading lists are also coming up so be sure to check back!

Posted by CA Verstraete at 8:44 AM No comments: