Death to the Undead - #Zombie Book 2

Fellow blogger Pembroke Sinclair's book two in her series is now out! 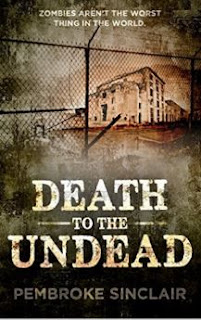 Seventeen-year-old Krista has already proven she can survive the zombie hordes.

After moving to North Platte with her distant cousin General Liet to help build a wall that will keep the zombies in the West, it becomes apparent that the zombies aren’t the biggest threat—some survivors are far more dangerous than Krista had ever imagined.

With the help of Quinn, a survivor and fighter from the zombie-infested wildlands of the West, they free the garrison at North Platte from the power-hungry Liet. But there is a bigger battle to fight.

The Families who rule Florida and use intimidation and the threat of the zombie horde to coerce their territory want Krista and Quinn captured, the zombies want to devour them, and other survivors want them dead. Caught between powerful forces, will they survive long enough to devise a new plan and put it into action? Or will they self-destruct?  - Amazon.com
Posted by CA Verstraete at 12:00 AM