Welcome to the Fantasy "Behind The Scenes" Tour - Stop #3
Meet Rosemary Johns, author of the Rebel Vampires series - see below!

**  See the B2Bcy events page for all events!

* I'll be in the Horror and Fantasy Genre Tours. See all here.

*  I'll be in the Horror and Fantasy Blog Hops - get all links here.

* View all the books at the Book Expo!


I’m a rebel. Who’d have guessed when my new urban fantasy series is called Rebel Vampires?

But Light? The British Rocker with a Triton motorcycle and a photographic memory? He’s even the rebel of the vampire world.

Rebel Vampires is set in a hidden paranormal London, where vampires are both predator – and prey. Where death drives desire. There are vampires, romance and rebels, along with a whole new twist on the vampire myth. And in the midst of it all? Light. The anti-hero vampire.

Know what? I’m not playing, love. I tried conforming once, didn’t fit.’ 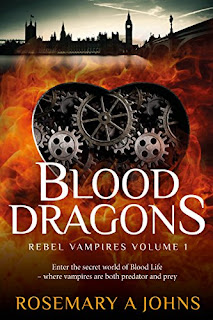 I love anti-heroes: Dark, complex and struggling on redemptive journeys against terrible odds. There’s something far more passionate about a love story, which shows an adult love: obsessive, destructive, agonizing – but true to the end. And capable of changing everything.

In urban fantasy, the journey is the heart. Light has his demons: inside and out.

‘Didn’t exactly stay dead.’ I pushed away from the fireplace, jumping up to sit on the arm of the leather sofa. I scrutinized your serious features and those intent grey peepers. ‘You really don’t know anything about us Blood Lifers, do you? How we evolved or--’

You shot me a sharp look. ‘You wouldn’t be here, if that’s what I thought.’

‘Alright then, as in, only good Blood Lifer’s one in shackles?’

Your mouth tightened into a thin line. ‘And what about humans? Do we come in small, medium or large?’

‘In America you can supersize.’ I grinned, but you didn’t return it. ‘Look, that’s not who I am now. I’ve been on blood abstention for fifty years.’ 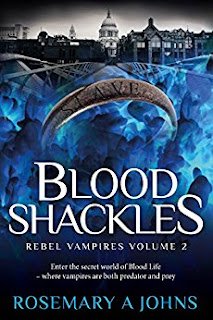 The challenge when writing an anti-hero is to create a true individual. The bad along with the good. Light fails, makes bad choices and suffers. Yet he still fights on. He’s loyal, persistent and keeps his promises. And you allow the reader to fall as deeply in love with the character as you are.

‘I might never be a bleeding hero but I could keep my promises.’

In Rebel Vampires, the world is divided between First Lifer (human) and Blood Lifer (vampire). The Blood Lifers hide in the shadows from the First. Both hunter and hunted. Light comes to realize that just as there’s no clear divide between the species, there are predators on both sides, too.

For 100 years in Blood Dragons Light danced in the carnage and the flames with Ruby – a savage Elizabethan Blood Lifer. Before his forbidden love for a human singer (Kathy) forced him to question Blood Lifer beliefs. To blood abstain. And to fight to save his love, both species and ultimately the world.

‘Crawling out of the black, Kathy once told me, would be my redemption. I never thought redemption would be this much of a bitch.’

An anti-hero needs a love. Abducted, defanged and enslaved by a secret human Blood Club in Blood Shackles (like Taken but with vampires…), Light finds it with the unlikely slaver’s daughter Grayse. She picks him, like a kid choosing a puppy.

You gaped at me, as if you’d been expecting me to speak some strange Blood Lifer tongue and not the Queen’s English. Like you hadn’t assumed I’d sound…human. ‘Here,’ you led the way to a sheltered trio of arches. ‘Better?’

I leant against a column, as I had a gander back at the silhouette of the great house, its steep terrace, and the drive sweeping down to it, between the dark sentinels of oaks.

In some screwed up world, this was the worst Jane Austen scene ever.

Well, maybe not ever…’

The thing about anti-heroes? Their love is never smooth. It’s unexpected. Unpredictable. But it’s fierce.

As Light would say: ‘it’s no namby-pamby fairy-tale’. It’s real love. He’s a dark hero. But who else would you want to save the world? 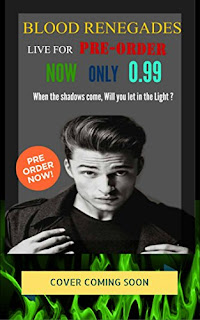 Now on Pre-order! This June 13th the third book in the Rebel Vampires series - Blood Renegades - is released: Light has only two weeks to give his witness, on trial for his life, before he’s burnt at the stake – because who wants to hear the truth?

The Renegades are the terrorists of the Blood Lifer world. They’re dedicated to hunting down the human slavers. They risk both worlds colliding: except the ruthless Blood Life Council have declared ‘war’ on the Renegades, starting with their leader, who they believe to be…Light.