More great books  - Great Reads  & Deals! Load up those beach bags!
Be sure to check the top tab for previous lists! 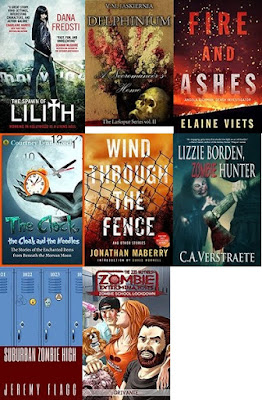 The Spawn of Lilith , Dana Fredsti - In la-la land, it pays not to be human. Vampires, succubae, trolls, elementals, goblins—studios hire anyone and anything that can take direction, be discreet, and not eat the extras. Human stuntwoman and struggling actress Lee Striga is a member of the legendary Katz Stunt Crew. They’re the best – and boast superhuman strength. Now it’s up to Lee to figure out who—or what—is killing the cast and crew on her new job. Especially when she goes from stuntwoman to lead role... and the next target.

New! Pre-order!
Delphinium, Or A Necromancer's Home (Larkspur series vol. 2), V. M. Jaskiernia - Fairies, disease and the fairies return. Pierre Salvador and his beloved, Elizabeth Anne, travel to his childhood home for the summer. They intend to spend some time alone together before he becomes the ruling duc (perhaps with her at his side). But Pierre finds himself set to inherit a mistrusting people with an uneasy history, and duties cannot be put off any longer. A fatal illness is spreading, he is being claimed by the fée, and someone has already tried to take his life. Though, with his being a Lord of Death, it will take much more to kill him.

Fire and Ashes, (Death Investigator Angela Richman Book 2), Elaine Viets - A 70-year-old womanizing financier is killed when his mansion goes up in flames, and  residents of the exclusive gated community blame the outsider, the victim's 20-year-old Mexican girlfriend, for the death.  Sifting through the ashes of a vicious crime - and the secrets of the privileged - Angela must use her forensic skills to get to the truth, and prevent an innocent woman from being burned.

In book 1, Brain Storm, Viets relies on some of her experiences as a stroke survivor, giving her death investigator additional hurdles to climb as she investigates the death of the neurologist who misdiagnosed her condition--and the chief suspect is the surgeon who saved her life.

** COMING SOON! I have a new novella coming out! See new webpage for details!
THE HAUNTING OF DR. BOWEN, A Mystery in Lizzie Borden's Fall River, offers another glimpse into the aftermath of the Borden murders - and reveals the secrets of Fall River from the viewpoint of Lizzie's doctor and neighbor!

Pre-order! The Book of Swords
The perfect fantasy collection if you love daring swordsman, dark enchantment and warrior women facing danger and death. ** Includes a new George R.R. Martin Song of Fire and Ice story.
Includes 16 new stories:
“The Best Man Wins” by K. J. Parker - “Her Father’s Sword” by Robin Hobb
“The Hidden Girl” by Ken Liu –“The Sword of Destiny” by Matthew Hughes“‘I Am a Handsome Man,’ Said Apollo Crow” by Kate Elliott - “The Triumph of Virtue” by Walter Jon Williams“The Mocking Tower” by Daniel Abraham - “Hrunting” by C. J. Cherryh“A Long, Cold Trail” by Garth Nix - “When I Was a Highwayman” by Ellen Kushner“The Smoke of Gold Is Glory” by Scott Lynch - “The Colgrid Conundrum” by Rich Larson“The King’s Evil” by Elizabeth Bear - “Waterfalling” by Lavie Tidhar“The Sword Tyraste” by Cecelia Holland - “The Sons of the Dragon” by George R. R. Martin

New! The Clock, The Cloak and the Needles: Stories of the Enchanted Items from Beneath the Morvan Moon,  Courtney Mroch - A cloak that can transform man to beast, and the stores of other enchanted items are included in this set of magical stories based on the author's fantasy novel.  Includes: The Clockmaker; Le Meneur, Des Loupes; Casting On, Binding Off.

Wind Through the Fence, Jonathan Maberry - From serial killers and zombies, to magic and dragons, this collection contains stories that run the gamut of genres, sure to thrill Maberry fans and short story lovers alike.
Includes:
1. Pegleg and Paddy Save the World - 2. Plan 7 from Sin City - 3. Red Dreams - 4. Saint John  - 5. She's Got a Ticket to Ride - 6. Spellcaster 2.0 - 7. T. Rhymer - Written with Gregory Frost  - 8. The Cobbler of Oz - 9. The Things That Live in Cages - 10. The Vanishing Assassin -11. The Wind through the Fence - 12. Faces

2017 marks the 125th anniversary of the Borden murders.


One hot August morning in 1892, Lizzie Borden picked up an axe and murdered her father and stepmother. Newspapers claim she did it for the oldest of reasons: family conflicts, jealousy and greed. But what if her parents were already dead? What if Lizzie slaughtered them because they’d become zombies?

GIRL Z:  My Life as a Teenage Zombie,  C.A. Verstraete - What happens when you're 16 and turning part-zombie from an accidental scratch? Becca faces changes no teen wants to experience when her cousin comes home with a deadly surprise.

New! The Zee Brothers: Zombie School Lockdown (Zombie Exterminators Vol. 2), Grivante -  A charter school fears they have an outbreak. Now it's up to the Zee Brothers, who find themselves trapped and weaponless as they try to protect the scared kids from a host of toxic, and hungry, undead. (YA)

Posted by CA Verstraete at 8:11 AM