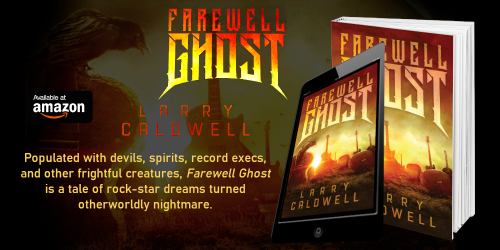 Farewell Ghost, Larry Caldwell - (Just released!) When rock-star Rocco Boyle dies at the height of his fame, guitarist Clay Harper losses the idol whose life he always wanted. In his wildest dreams, Clay never imagined that he’d soon be living on the infamous estate where Boyle spent his last night.

Or that Boyle would still be in residence….

But in the hills of Los Angeles, things are seldom what they seem, and despite all warnings, Clay ventures deep into the city’s underbelly—touring its famous rock clubs and hangouts, auditioning for a rising local band led by the talented and alluring Savy Marquez— to discover what really happened the night Boyle died…. And though the answer is terrifying, uncovering it may be the very thing that launches Clay to stardom.