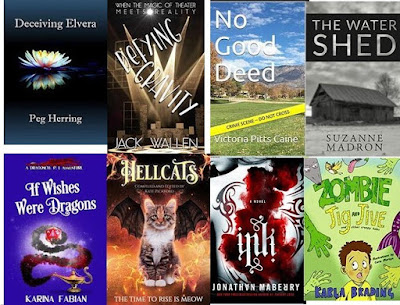 Been seeing some neat books lately so figured I'd put together a Black Friday and Thanksgiving Reading List. It's always fun to discover new books and authors I wouldn't know about, too, except for others' recommendations. Enjoy some great deals!! Have a great holiday and be safe!

Hellcats  Anthology - Sixty-nine stories of feline adventure, from Mr. Darcy to Hunter S. Thompson as a cat. Including with stories by various authors including "Lead Me Not Into Temptation" by Craig Martelle. (Great concept!)

Peace, Love and Crime: Crime Fiction Inspired by Songs of the '60s - This is a fun concept if you like '60s music! Twenty-three stories by assorted authors,including "It Ain't Me Babe" by Terrie Farley Moran and "Suspicious Minds" by John M. Floyd. Peace, love, and harmony were the goals. Meditation, mysticism, and psychedelic drugs were the way to enlightenment. Peace, love, and crime were often the result, sometimes humorous, sometimes deadly.

The Haunting of Dr. Bowen, A Mystery in Lizzie's Borden's Fall River, C. A. Verstraete (On sale, 99 cts.!) - A ghostly mystery/love story companion novella to Lizzie Borden, Zombie Hunter from the viewpoint of Lizzie's doctor and neighbor, Dr. Seabury Bowen. Bowen was the first official on the horrific axe murder scene in 1892 of Borden's father and stepmother. 143 pgs. Sci-Fi and Horror Specials through Dec. 25

Ink , Jonathan Maberry - Tattoo-artist Patty Cakes has her dead daughter’s face tattooed on the back of her hand. Day by day it begins to fade, taking with it all of Patty’s memories of her daughter. All she’s left with is the certain knowledge she has forgotten her lost child. The awareness of that loss is tearing her apart. Something is out there. Something cruel and evil is feeding on the memories, erasing them from the hearts and minds of people like Patty and Monk and others.

Pestilence, Breathe If You Dare, Brian L. Porter - English countryside, 1958. The idyllic village of Olney St. Mary has stood in its peaceful location for over 900 years. Until one day, when two teenage boys are struck by a mysterious illness. The newly arrived Doctor Hilary Newton suspects a common flu to be the cause of their malady. Before long, the doctor and residents of Olney St. Mary are plunged into a nightmare, as the disease ravages the local population. Despite the doctors employing the latest medicine available, the death toll keeps rising. Someone in the village knows the reason behind the pestilence that has struck at the heart of the village, but can the medics learn the truth before it’s too late, or will they join the growing list of names that appear on the death roll in Olney St. Mary?

The Good House: A Novel, Tananarive Due - The house Angela Toussaint's late grandmother owned is so beloved that townspeople in Sacajawea, Washington, call it the Good House. But is it? Angela hoped her grandmother's famous "healing magic" could save her failing marriage while she and her family lived in the old house the summer of 2001. Instead, an unexpected tragedy ripped Angela's family apart. With the help of Myles Fisher, her high school boyfriend, and clues from beyond the grave, Angela races to solve a deadly puzzle that has followed her family for generations. She must summon her own hidden gifts to face the timeless adversary stalking her in her grandmother's house -- and in the Washington woods.

The Water Shed, Suzanne Madron -After receiving an impossible phone call, Sam returns to old stomping grounds to discover who - or what - is calling from beyond the confines of an old property. (Short fiction, 42 pgs.)

Defying Gravity, Jack Wallen - Wil Jackson's dream is about to come true. Broadway. Playing the Emcee in "Cabaret". Willkommen to the world of professional theater, where the blinding lights of the stage transcend time and give life new meaning. When the soul-healing joy of creation breaks the bonds of reality, nothing is what it seems.

If Wishes Were Dragons: A DragonEye PI Story, Karina Fabian - When Vern's gaming friends find a genie's lamp, they wish for a real-life adventure - and boy, do they get it! Vern's party is transported to Faerie to fight monsters, crawl dungeons, rescue fair maidens...and deal with some of Vern's old schemes that have come back to bite him in the tail. Vern even gets his secret wish fulfilled when he sees his dragon kin for the first time in centuries. But the genie is not what he seems. The Wish World is the real-world Faerie of Vern's past...and their adventure is no game. Book 2 in the DragonEye PI series.

No Good Deed, Victoria Pitts Caine - Jessa Fisher grew up in the small mountain community of Montaña Verde, but when she and her fellow detective, Eric Lane, are assigned to a murder case she begins to question what she knows about the town’s inhabitants. Is her current case linked to multiple deaths spanning decades? What are the connections, and who holds the answers? As she unravels these secrets, she’s inspired to look into the mysterious disappearance of her great-grandmother.

The Haunting of Bechdel Mansion, Roger Hayden - A young couple move into their dream home only to find a dark presence lurking from within. For Curtis and Mary, the small town of Redwood, Indiana seems too good to be true. Everything is perfect, including the Victorian mansion they purchased at a great price. But they soon experience terrifying supernatural encounters tied to the deadly secrets of an unsolved mass murder. Can they solve the mystery in time? Or will they face the same doomed fate as the tenants who came before them?

The Highway, CJ Box - Watchng the TV series. Pretty good though I see the book is different, which isn't a surprise but then makes it worth reading. Private investigators search for two missing girls and a killer in Montana.

Deceiving Elvera, Peg Herring  - (Pre-Order, releases Dec. 4) A tale of friendship, love, loss ,and the transformative power of helping others spanning the decades from the 1960s to the present. A ship's steward on a cruise in Thailand vows to succeed in helping the difficult Elvera where others have failed.  The more steward Michael learns of Miss E’s past, the more he suspects that she harbors a host of secrets, (including people smuggling) even in her seventh decade and despite functional limitations and constant pain. Getting to know Miss E brings Michael to a reckoning with his own past, which brings them both to a suspenseful situation and a shocking conclusion.

The Underclass, Dan Weatherer - In a world where the rules of death suddenly no longer apply, thirty-something Lee Callows, prepares for the greatest day of his largely uneventful life: promotion to the first rung of middle management. However, his (after) life takes an unexpected turn when he is involved in a fatal road traffic accident on his way to work. Yet his death is the least of his problems!

Zombie Jig and Jive, Karla Brading - For fun, a children's book with seven "blood-curdling" short stories of ghosts on the moon, to zombie best friends and more!

Zombie Mermaids from the Deep,  Chris B -  In 2113., nations under the control of GlobalCore nations have united to feed the masses and protect the elites inside gated cities from the undead virus, dubbed Zbola. Outside the walls, those who are able-body seek safety against raging weather and changing landscape. When destiny meets prophecy, a band of Outsiders clash with a group of Insiders on their way to the coast where they find worse creatures crawling ashore turning tropical dreams into a biting nightmare.