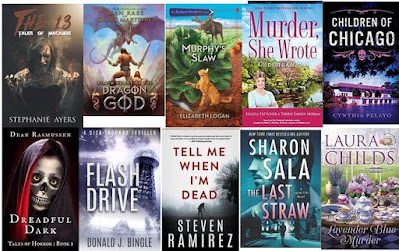 Some interesting new books coming up that I know you'll want to read, so dive right in!

The 13: Tales of Macabre, Stephanie Ayers - (Book 2 of 4) Who can resist weird, scary short stories with creatures of myth/legend and killer... watermelons? (Free at time of writing.)

Turning the Tied, as in Tied-In fiction  - (Pre-Order, releases March 13) Presented by the International Association of Media Tie-In Writers, discover favorite characters in new settings in tales that'll will take you through the centuries and from the depths of the ocean to the stars. Includes stories by Tim Waggoner, Jonathan Maberry, Max Allan Collins, Stephen D. Sullivan, and others, edited by Jean Rabe. (* Paperback now available at B&N.)

Black Heart of the Dragon God, Jean Rabe and Craig Martelle - USA Today Bestselling Author Jean Rabe returns to her fantasy roots! Capturing dragons isn’t a hero’s work, or is it?  The Barber is a reformed pirate. He’s built a town but wants more. Enter Goranth the Mighty, a hero from a different age, a Northman, and a warrior like no other. With nothing less than a dragon as their goal, the adventurers head into the wild. Hope springs when they find a small one, until they realize the challenge is greater than expected. But there’s more: raiders seek to steal what the Barber has fought for. An ancient creature rises from within the earth, and a beautiful enchantress fights to stop her.

Children of Chicago, Cynthia Pelayo - A horrifying retelling of the Pied Piper fairytale set in present-day Chicago. When Detective Lauren Medina sees the calling card at a murder scene in Chicago’s Humboldt Park neighborhood, she knows the Pied Piper has returned. When another teenager is brutally murdered at the same lagoon where her sister’s body was found floating years before, she is certain that the Pied Piper is not just back, he’s looking for payment he’s owed from her. Lauren’s torn between protecting the city she has sworn to keep safe, and keeping a promise she made long ago with her sister’s murderer. She may have to ruin her life by exposing her secrets and lies to stop the Pied Piper before he collects.

Dreadful Dark Tales of Horror Book 1, Dean Rasmussen -- Three supernatural suspense tales. A delusional, self-righteous serial killer takes care of the “trash” in town, but discovers it’s not so easy to keep it buried. A charismatic stranger entices three down-on-their-luck men to a party only to later reveal his true intentions. After moving into a new house, a brother and sister discover an aging tree in the backyard has a mind of its own. (65 pgs.)

Lilith: Hollywood Monsters, Dana Fredsti - (Pre-order, releases Jan. 11, 2022)  Third in the Lilith series -  Lee Striga is an actress, movie stuntwoman, and demon hunter returning to Los Angeles. Back at the Katz Family stunt ranch she finds animals of all kinds taking refuge on the grounds, and the supernatural creatures who populate Hollywood on edge to the point of violence. People are vanishing without a trace, and clues lead to a legendary mansion famous for its horrible deaths--the location for Lee's next film job. (Start with Book 1,  The Spawn of Lilith.)

Lavender Blue Murder, (A Tea Shop Mystery Book 21) , Laura Childs - Tea maven Theodosia Browning and her tea sommelier Drayton Conneley are guests at a bird hunt styled in the precise manner of an English shooting party. But as gunshots explode like a riff of Black Cat firecrackers, another shot sounds too close for comfort to Theodosia and Drayton. Intrigued but worried, Theodosia wanders into the neighbor's lavender field where she discovers their host, Reginald Doyle, bleeding to death.

Murder She Wrote: Killing in a Koi Pond (Jessica Fletcher Mystery 53 (Pre-order, Releases June 8), Jessica Fletcher & Terrie Farley Moran - After traveling to Bethesda for a mystery writers’ conference, Jessica Fletcher decides she’s earned a vacation and takes a train to Columbia, South Carolina, to visit her old college friend Dolores, who has recently married her third husband, Willis Nickens, a wealthy and cutthroat businessman. But the morning after she arrives, Jessica discovers Willis facedown in the koi pond, and despite what the police think, she’s sure foul play is involved.

The Last Straw, (The Jigsaw Files Book 4) Sharon Sala - (Pre-order, Releases Feb. 23)  Still reeling after a series of earth-shattering events, a desperate woman hires PI Charlie Dodge of Dodge Investigations to find her missing sister. The head-scratcher of a case is exactly the distraction Charlie and his steadfast partner, Wyrick, need .Charlie knows his partner can handle herself, but when she uncovers a past connection that paints a target on her back, the threat of losing her hits Charlie hard. There’s nothing he wouldn’t do to keep Wyrick safe, but with the clock ticking on a victim they’ve yet to find, it’s only a matter of time before the cold-blooded killer leads them to a deadly end. (See Book 1, The Missing Piece.)

* Grab some scary reads on The Dark Side of Kindle Unlimited through March 2.

Flash Drive, (A Dick Thornby Thriller Book 3), Donald J. Bingle -  (* Get in on the Kickstarter through Feb. 20.) Dick Thornby is not Hollywood's idea of a spy. He's a new kind of spy for a new kind of world. Of course, it's complicated when you're an international spy with a wife, a kid, and a mortgage, but everyone thinks you're really a waste water treatment consultant. And, it's bad when your family finds out about your clandestine life, your wife wants to keep tabs on where you are, and your kid tries to emulate your espionage activities. But, it's downright dangerous for your career, your family, your colleagues, and your prospects of living until retirement when the powers-that-be at the Subsidiary discover you haven't been keeping the secrets you should have.  (Start with Book 1, Net Impact.)

Tell Me When I'm Dead, Steven Ramirez - Dave, a recovering alcoholic, wakes up to find his town overrun by zombies. Dave Pulaski wasted his youth getting drunk. When he met Holly, a beautiful, strong-willed woman, he decided to get his life together. Now a plague is decimating the town of Tres Marias. And it turns the victims into shrieking flesh-eaters who hunt. To survive, Dave, Holly, and a small band of soldiers must kill the living as well as the dead. But Dave is this close to drinking again. The vengeful woman he cheated with is after him–and she’s no longer human. The ravening hordes are swelling. And the beleaguered military forces are outnumbered. How can anyone live through this?