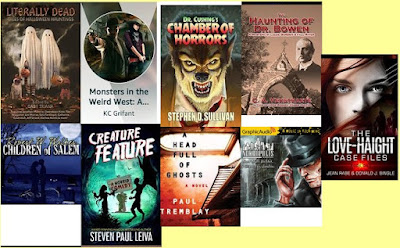 There are sooo many good new horror offerings that I can't keep up! Turn the lights off and get reading! haaa!

* A gift for you through Halloween! Get some great creepy Halloween reads free here.

* Don't forget to visit the October Frights Blog Hop participants here and below:

Horror Quickies, Vol. 1, Steve Hudgins - Short flashes of horror. Over 30 Tales of Terror • The seance was just fun and games until they asked the spirits to give them a sign that they were there. • A young woman hears her mother talking in the basement. The problem is, her mother is not at home. • Strange tales emerge from those who made the mistake of traveling through the eerie town of Allensburg. • The hospital is abandoned. So, why is there a patient standing in the corridor? • A house sitter fears she may not be alone in the house. (*First of 5-book set was free at time of posting.)

Literally Dead: Tales of Halloween Hauntings,  Gaby Triana, Editor. Stories by Jonathan Maberry, Gwedolyn Kiste, Tim Waggoner, Lisa Morton and others. Nineteen spooky ghost tales that you'll want to read while under the covers (and the lights on!)

Monsters in the Weird West : A Collection of Gunslinging Adventures, KC Grifant - Kindle Vella. Read issues 1-3 free. In the Weird West, unflappable sharpshooter Melinda and her easygoing partner Lance hunt a menagerie of monsters. From cannibalistic gremlins to psychic bugs, there's nothing this gunslinging duo can't handle--or so they think.

Tavern of Terror, Vol. 2 - Scare Street assorted authors - (New! Sale, 99 cts) An artist struggles to hold on to her soul as she feverishly completes a deadly masterpiece. The death of a movie producer unleashes an ancient reel of film with a dark secret worth killing for. And a woman gets the scare of her life as strange intruders break into her home...Welcome back to Hannigan’s, the tavern of a thousand tales. In this cozy neighborhood pub, everyone has a story to tell. But those stories don’t always have a happy ending.

As you sip your drink and listen to another nightmarish tale, you slowly realize the crowd around you has changed...It’s closing time. And it looks like the last drink is on you… 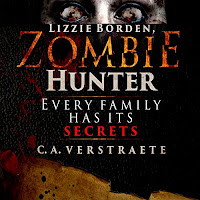 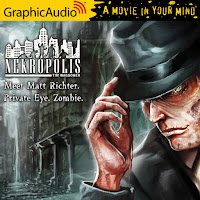 Lizzie Borden, Zombie Hunter, C.A. Verstraete - One hot August morning in 1892, Lizzie Borden picked up an axe and murdered her father and stepmother. Newspapers claim she did it for the oldest of reasons: family conflicts, jealousy, and greed. But what if her parents were already dead? What if Lizzie slaughtered them because they’d become...zombies?

Thrust into a horrific world where the walking dead are part of a shocking conspiracy to infect not only Fall River, Massachusetts, but also the world beyond, Lizzie battles to protect her sister, Emma, and her hometown from nightmarish ghouls and the evil forces controlling them.

This is fun. Includes sound effects. Be sure to listen to the sample at the link above! Centuries ago, when Earth's Darkfolk -- vampires, werewolves, witches and other creatures -- were threatened by humanity, they departed our planet's dimension and journeyed to a shadowy realm, where they built the great city of Nekropolis. Matt Richter is an Earth cop who came through a portal to Nekropolis on a case, died, and was resurrected as a zombie. Unable to return home, he works as a private investigator on the very mean streets of this shadowy, dark city. And in this first case, Richter must help a delectable half-vampire named Devona recover a legendary artifact known as the Dawnstone, before it’s used to destroy Nekropolis itself. That is, if he can survive the variety of horrors that infest the city. 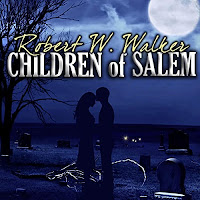 Children of Salem, Robert W. Walker - A spy working for religious organizations, Jere Wakely is summoned to Salem Village Parish, where it has become obvious to church authorities that there is serious trouble. He is reluctant to return to his hometown for many reasons, not the least being that his heart is broken, and he's worried about running into his former lover, Serena Nurse.

During his investigation, he has no expectation that their love will be rekindled. But their renewed passion parallels a greater fire - one of terror amid the infamous Salem Witch Trials. A witch hunt in this important election year of 1692 is backdrop to a romance filled with intrigue and mystery; the history is accurate, and the truth is disturbing yet fascinating.

The Haunting of Dr. Bowen, A Mystery in Lizzie Borden's Fall River -
Limited Time Halloween Sale (99 cts!)
Dr. Seabury Bowen—physician to the infamous Lizzie Borden—swears he’s being stalked by spirits, though his beloved wife thinks it’s merely his imagination. But the retired doctor insists that neither greed nor anger provoked the recent sensational axe murders in Fall River. Rather, he believes the city is poisoned by bad blood and a thirst for revenge dating back to the Indian and Colonial wars.

The lives of the Barretts, a normal suburban New England family, are torn apart when fourteen-year-old Marjorie begins to display signs of acute schizophrenia.To her parents’ despair, the doctors are unable to stop Marjorie’s descent into madness. As their stable home devolves into a house of horrors, they reluctantly turn to a local Catholic priest for help. Father Wanderly suggests an exorcism; he believes the vulnerable teenager is the victim of demonic possession. He also contacts a production company that is eager to document the Barretts’ plight. Fifteen years later, a bestselling writer interviews Marjorie’s younger sister, Merry, who recalls long-buried secrets and painful memories that clash with what was broadcast on television.
Creature Feature: A Horrid Comedy - Steven Paul Leiva
(Sale 99 cts!)* ​
THERE IS SOMETHING STRANGE HAPPENING IN PLACIDVILLE!It is 1962. Kathy Anderson, a serious actress who took her training at the Actors Studio in New
York, is stuck playing Vivacia, the Vampire Woman on Vivacia’s House of Horrors for a loca
l
Chicago TV station. Finally fed up showing old monster movies to creature feature fans, she
quits and heads to
New York and the fame and footlights of Broadway.She stops off to visit her parents and old
friends in Placidville, the all-Ameican, middle-class, blissfully normal Midwest small town she
grew up in.But she finds things are strange in Placidville.

Dr. Cushing's Chamber of Horrors, Stephen D. Sullivan  - Despite a lifetime of traveling with their father to collect strange artifacts, twins Topaz and Opal Cushing have never fully believed in monsters or the supernatural. Werewolves? Vampires? Living mummies? None of those could be real. Those legends are just for rubes. Right? Since the girls’ father has been away, though, strange things have been happening in the family’s little exhibit—and in the waxworks studio that shares their dilapidated Victorian mansion on the outskirts of London

Fun Halloween Read! California's Haight Ashbury district is full of magic - and all kinds of monsters. And there's a law firm who'll rep these "other-than-humans" when they need help....  Check out some of their most unusual cases in  The Love Haight Case Files Book 1 - Jean Rabe and Donald J. Bingle.

* A gift for you through Halloween! Get some great creepy Halloween reads free here.

* Looking for something new and spooky to read?

Posted by CA Verstraete at 6:30 AM