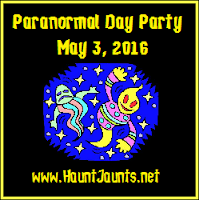 Some spookiness and what not, that's what!

The Haunting of Lizzie Borden

Rumors abound that the house at what was numbered 92 Second Street in Fall River, Massachusetts is seriously haunted. Not surprising since it was the place where Lizzie Borden allegedly hacked her father and stepmother to death with an ax in 1892.

It would make sense, of course, that something lingers, given the gruesomeness of the crime. Is it a spirit? A feeling of unease? Something darker? (Read the Borden autopsy reports—if you dare.)

You can find out on your own, of course, by booking a night at the former home of Lizzie, now the Lizzie Borden Bed and Breakfast at the house, now numbered 230 Second Street. The owner even claimed being spooked out of the house when she first bought it, according to Bio.

And, well, it’s a good selling point for the business, right? Not that such stories need to be manufactured. People have long had a fascination with the macabre and the ghoulish… In Lizzie’s day as today when people stop to look at a traffic accident, they lined the streets to get a glimpse of her and gathered outside the house to watch and gossip. The trial itself was reported nationwide and became the first “trial of the century.”

Whether the Borden house is haunted, of course, falls into the same category for many as the crime itself –is it or isn’t it? Did she do it or didn’t she?

My theory? She did it… but for a good reason…

Discovering Mr. and Mrs. Borden have become zombies thrusts Lizzie into a horrific world where the walking dead are part of a shocking conspiracy to infect not only Fall River, Massachusetts, but also the world beyond. Now Lizzie enters the fight, vowing to do everything she can to protect her sister, Emma, and her hometown, from this horrid scourge.

Nowhere in nineteenth-century Fall River is safe from these nightmarish ghouls or the evil forces controlling them.

Yet, for Lizzie, uncovering her city’s—and family’s—secrets may come at a terrible price…

* Follow me on Facebook – sign up for my periodic newsletter at the website to keep tuned in for details!! All kinds of cool stuff – cover reveal, prizes, etc. and the launch!!– coming!
Posted by CA Verstraete at 12:00 AM