It's SUMMER OF ZOMBIE time! Party like the undead!

I'm up today with a teaser from my upcoming book, Lizzie Borden, Zombie Hunter: 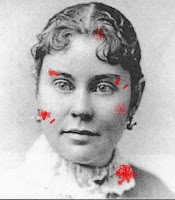 About the book, Lizzie Borden, Zombie Hunter
by C.A. Verstraete:

Discovering Mr. and Mrs. Borden have become zombies thrusts Lizzie into a horrific world where the walking dead are part of a shocking conspiracy to infect not only Fall River, Massachusetts, but also the world beyond. Now Lizzie enters the fight, vowing to do everything she can to protect her sister, Emma, and her hometown, from this horrid scourge.

Nowhere in nineteenth-century Fall River is safe from these nightmarish ghouls or the evil forces controlling them.

Yet, for Lizzie, uncovering her city’s—and  her family’s—secrets may come at a terrible price…

August 4, 1892
THUMP.
Lizzie Borden drained the rest of her tea, set down her cup, and listened to the thumps and the sound of furniture moving upstairs. My, my, for only ten o’clock in the morning my stepmother is certainly energetic. Housecleaning, already?
THUMP. THUMP.
For a moment, Lizzie forgot her plans to go shopping downtown. THUMP. There it went again. It sounded like her stepmother was rearranging the whole room. She paused at the bottom stair, her concern growing, when she heard another thump and then, the oddest of sounds—a moan. Uh-oh. What happened? Did she hurt herself?
“Mrs. Borden,” she called. “Are you all right?”
No answer.
She wondered if her stepmother had taken ill, yet the shuffling, moving, and other unusual noises continued. Lizzie hurried up the stairs and paused outside the partially opened door. The strange moans coming from the room sent a shiver up her back.
Lizzie pushed the door open wider and stared. Mrs. Borden stood in front of the bureau mirror clawing at her reflected image. And what a horrid image it was. The sixty-seven-year-old woman’s hair looked like it had never been combed and stuck out like porcupine quills. Her usually spotless housedress appeared wrinkled and torn. Yet, that wasn’t the worst. Dark red spots—blood, Lizzie’s mind whispered—dotted the floor, and streaked the sides of the older woman’s dress and sleeves.


Lizzie gazed about the room in alarm. The tips of Father’s slippers peeking out from beneath the bed also glistened with the same viscous red liquid. All that blood! What happened here? What happened? (To Be Continued…)