September Reading List
Fill those Kindles in your book bags and back-to-school backpacks
with some great reads (other than boring textbooks!) 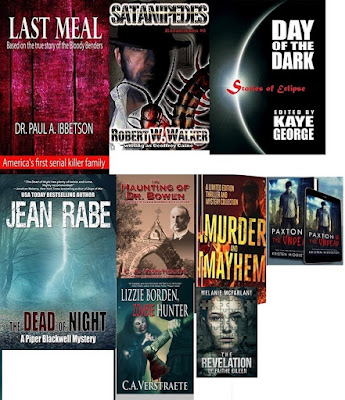 Last Meal: Based on the true story of the Bloody Benders, Paul Ibbetson


In 1873, the largest serial killing spree in American history happened along the Osage Trail in Kansas. The family would later be identified as the Bloody Benders. Unlike most criminals of their time, they escaped and were never caught. This true history is now captured in a gripping fictional tale that takes the horror of murder on the plains to a dark new level.

Just when Archeologist and Vampire Slayer, Dr. Abraham Stroud thinks he can take it easy, take a second seat on a dig in West Texas, he is wrong from the outset. Plagued by warnings he does not at first recognize, Abe soon finds himself in the thick of an attack on humankind by a pod of prehistoric, giant centipedes that have cultivated a taste beyond livestock to a taste for humans. The creatures are known to local Native Americans as 'Burrowers' as they have seen them before, but for Abe and those around him, there is a brewing war anticipated and soon engaged, the results of which are horrific in terms of human life. Day of the Dark, Stories of Eclipse, Edited by Kaye George - One solar eclipse and what do you get? Two dozen spine-chilling short mysteries! 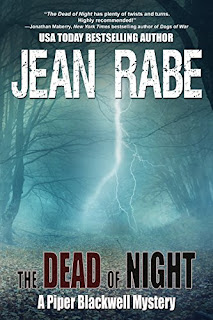 The Dead of Night, Piper Blackwell Book 2, Jean Rabe - As Sheriff Piper Blackwell rushes to a clandestine meeting with an aging, paranoid veteran who believes spies are trailing his every move, she is caught in a fierce thunderstorm. Pounding rain drums against the bluff, washing away the earth and revealing a grisly secret someone tried to bury a long time ago.

Putting a name to the skeleton on the bluff, and searching for the thief who robbed the old veteran of his life’s earnings, sends Piper delving into the sleepy towns that dot her rural county. Now she’s digging into pasts perhaps best left alone.

The Haunting of Dr. Bowen, A Mystery in Lizzie Borden's Fall River - C.A. Verstraete -  I give Dr. Bowen - Lizzie's doctor -  an opportunity to share his side of things... and look at whether he was haunted by the murders of his neighbors, Andrew and Abby Durfee Borden, allegedly committed by their daughter, Lizzie Borden, on August 4, 1892.


** Check it out! Did you see the cool new book trailer for The Haunting of Dr. Bowen? 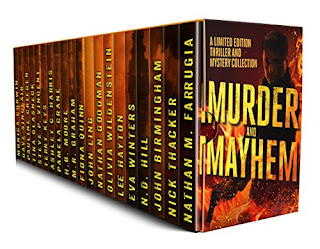 Pre-order - 99 cents sale!
Murder and Mayhem, Limited Edition Collection, Assorted Authors - From tales of spies and espionage to small-town mysteries and traditional courtroom thrillers to hard-boiled noir, this collection offers a cross-section of modern thriller and mystery.Scroll Up Now and Pre-order Today to secure your 20 stories from the masters of thrills and kills!

Monsters of Myth,  Gary J. Green - All you ever wanted to know about Bigfoot,  Chupacabra, Fairies, and more. Teens to adults! Get it free at Bookfunnel.

The Revelation of Faithe Eileen, Melanie McFarlane - Faithe Eileen can't remember why ex-boyfriend Jake won't talk to her anymore. She can't remember the reason her daddy ran away or why her momma paces the hallway outside her bedroom door at night. All Faithe knows is something goes wrong everytime she gets upset, and she's starting to lose control. This novelette is perfect for fans who want a short read filled with mystery and terror.

Lizzie Borden, Zombie Hunter, C.A. Verstraete - I followed the crimes and the trial, along with offering a "different"  solution to the murders of the Bordens by their daughter, accused murderess Lizzie Borden, on August 4, 1892.
* New 2nd edition & New cover! 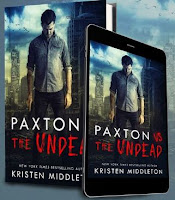 Paxton vs. The Undead, Kristen Middleton - Meet Paxton. A man who barely survived a plane crash and is now slapped in the face with a zombie apocalypse. Unfortunately, Paxton hasn't been out of his apartment for the last year, due to his Agoraphobia. But, he knows that the only way to survive this horror is to leave the safety of his home, whether he likes it or not. Especially, since Coborn's no longer delivers....Dark humor, profanity, and violence. (Related to Zombie Games? She's not sure yet....)