** My friend Jean Rabe is on a blog book tour for her upcoming new mystery, The Dead of Night. Be sure to check it out! See all the post links here.

In it, she underlines the importance and value of dogs, which she also includes in her upcoming book.

Everyone should have a dog... 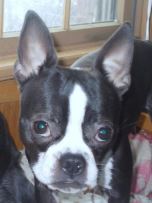 Yes, even the infamous Lizzie Borden had dogs, namely three Boston Terriers, which also were a "fashionable" breed at the time.

Well, someone who loves dogs can't be all bad... right? It is one redeeming quality, though someone might say that despite having but a few loyal friends and staff, Lizzie still had to be lonely.

She was acquitted of the crimes a year after the horrific 1892 axe (hatchet) murders of her father and stepmother, but she remained a social pariah. Not convicted, but guilty nonetheless. This year marks the 125th anniversary of the Borden murders.

Even Lizzie and her sister had a falling out and never talked again. But she had her dogs. They are buried in the Pine Ridge Pet Cemetery in Dedham, MA.

Since I based my book, Lizzie Borden, Zombie Hunter, on the real life events, trial, and some of Lizzie's life after she was acquitted, I naturally had to put a dog in the story.


The only change Lizzie was certain Emma disliked had been her decision to get a dog. “Emma, I know how you feel about dogs, but I decided to bring the most darling Boston Terrier home. I promise to keep him out of your way upstairs.”

Oddly enough, once the actual danger passed and those who had left in the height of the attacks began returning to their homes, Lizzie soon learned that her former status as the local pariah had not changed a whit.

When  she  took  the  dog  for  a  morning  walk  down  the  street,  any neighbors who appeared outside at the same time pretended not to see her. They turned their backs on her or hurried inside. It hurt, she had to admit, and soon she confined her outdoor excursions to her gardens and the area around her own house. She and the dog had to be content in their own backyard.
Posted by CA Verstraete at 12:00 AM