While you're out shopping for school supplies, add a GOOD BOOK to your shopping list! MORE Fantastic Reads to Dive Into!! 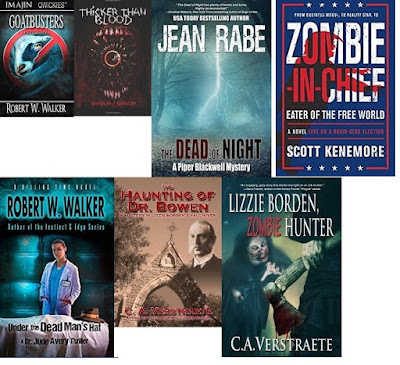 NOTE: Prices were valid at time of blog. Check for any changes.

Shattered Worlds, various authors set- Escape into 23 epic worlds that will leave you breathless. From dystopian nightmares to gorgeous steampunk and fantasy settings to fairy-tale retellings and beyond, SHATTERED WORLDS has every story you've been dying to get your hands on!

Pre-order! Releases Sept. 15
Goatbusters, Quickie Horror Novella, Robert W. Walker - Something escaped the old Riverview sideshow exhibit when it closed. It's in the Chicago River - and it's hungry. When bodies start turning up, the Old Fart Squad is called out of retirement. Now they must double as "Goatbusters" - if they find the right bait...
If you love old Chicago history... fun, humorous horror. Third in the Chicaghosts novella series with The Monster Pit (#2) and Gone Gorilla (#1)

Thicker Than Blood, Justin Hamelin - Short story collection of monsters - werewolves, ghosts--and ourselves, sure to make you sleep with a light on. Features fantasticly gruesome artwork by Kevin Spencer. (Paperback - Kindle book coming.)

The Dead of Night, Piper Blackwell Book 2, Jean Rabe - As Sheriff Piper Blackwell rushes to a clandestine meeting with an aging, paranoid veteran who believes spies are trailing his every move, she is caught in a fierce thunderstorm. Pounding rain drums against the bluff, washing away the earth and revealing a grisly secret someone tried to bury a long time ago.

Putting a name to the skeleton on the bluff, and searching for the thief who robbed the old veteran of his life’s earnings, sends Piper delving into the sleepy towns that dot her rural county. Now she’s digging into pasts perhaps best left alone.

The Haunting of Dr. Bowen, A Mystery in Lizzie Borden's Fall River, C.A. Verstraete -  125 years later, I give Dr. Bowen - Lizzie's doctor and neighbor -  an opportunity to share his side of things...

Dr. Seabury Bowen—physician to the infamous Lizzie Borden—swears he’s being stalked by spirits, though his beloved wife thinks it’s merely his imagination. But the retired doctor insists that neither greed nor anger provoked the recent sensational axe murders in Fall River. Rather, he believes the city is poisoned by bad blood and a thirst for revenge dating back to the Indian and Colonial wars.

Now on Kindle!
Under the Dead Man's Hat, Dr. Jude Avery Thriller, Killing Time Book 1, Robert W. Walker - Two Chicago and Cook County, Ill. medical examiners team up to go after the most depraved killers in the city. Now they're headed to LA,  on the heels of a killer who's filmed and uploaded his horrors. Now the investigators must rely on their weapons and their skills to stop evil in its track.

** Get a new LIZZIE BORDEN, ZOMBIE HUNTER story -- and in all, 20+ free zombie-apocalyptic samples, books, novellas and short stories. WOW!!!

Lizzie Borden, Zombie Hunter, C.A. Verstraete - August 4th was the 125th anniversary of the infamous Borden murders. I followed the crimes and the trial, along with offering a possible solution - What if Lizzie Borden did it... because she had no other choice?  (new 2nd edition & new cover!) 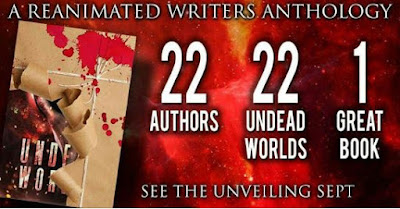 The Reanimated Writers Group on FB is having a cover reveal party for a new, upcoming zombie anthology, Undead Worlds, at 7 p.m. EST, Sept 9 to 12 p.m., Sept. 10. Visit the FB group HERE. 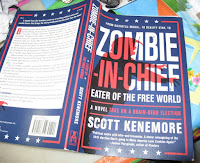 I'm reading an arc of Scott Kenemore's latest, Zombie-In-Chief: Eater of the Free World, A Novel Take on a Brain-Dead Election.

Kenemore, author of Zombie, Illinois (a funny take on Chicago politics), has the 2016 election pegged dead-on when "The Tycoon" wins the election. His "secret?" He's a zombie! It's like reading about the real-life events - but with zombies and strange twists. Stranger than real life? Well... read it and see!