While you're waiting for Santa or to celebrate other holidays, take time to curl up with a good book! Here's a selection to make the days brighter (and the nights more frightening!)

Frame Shop: Critiquing Another Writer Can Be Murder, Donald J. Bingle - Poor Harold. He thinks his cat mystery is the best ever, then a NYT bestselling author joins the writing group and wows everyone. Harold agrees to help his new mentor with research, which soon leads to murder... and more murder.

Grand Lac, Carl Brookins - Sam Black is accused of murdering a member of a small group of investors who have purchased large lots on a mountain outside of town in northern Idaho. His mother believes the young stock day-trader stumbled on some shady city officials’ illegal activities. When he’s indicted, cousin Edie and her special investigator-partner jump feet first into a strange town of guns and civic corruption in a complicated effort to save Sam from prison, or worse 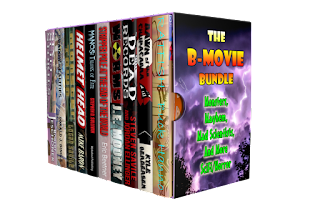 The B Movie Bundle , Monsters, mayhem, mad scientists and more! Get 10 weird and wondrous ebooks by a collection of authors including J Mooney, Steve Saville, Stephen Sullivan, Don Bingle and others.


Phoenyx and Cole survived the end of the world. The alien invasion that took out most of the population and crippled any form of government—they’d fought that, and they’d survived.Hope is hard to come by, but when they need it most, it does come—in the form of a different alien entirely—beautiful, with the wings of a fairy, the voice of a siren... And the teeth of a vampire. Sometimes hope is most devastating of all. Never Trust Beautiful Things.

In the Company of Wolves (Of Witches and Werewolves Book 2), Cory Barclay  - In 1592, Europe is in chaos. Religious factions have torn the region apart and witch-hunts have become a part of everyday life. As each of three travelers searches for individual answers, these three seemingly separate stories converge in a place which may hold the key for them all. Based on true events involving one of the deadliest witch trials in European history, this tale of adventure, mystery, and the search for truth reminds us that, ultimately, no one is safe . . . in the company of wolves.

The Scars of Survival (Scars Series Book 1), Tyranni Thomas - Love becomes a nightmare when Krishna Bauer, born to an era unaccepting of her kind and trying to find her sister, ends up on the wrong side of the Gestapo in a concentration camp.

Lizzie Borden, Zombie Hunter,  C.A. Verstraete - (Sale! $1.99 Dec. 15-Jan. 7)  Every family has its secrets… One hot August morning in 1892, Lizzie Borden picked up an axe and murdered her father and stepmother. Newspapers claim she did it for the oldest of reasons: family conflicts, jealousy and greed. But what if her parents were already dead? What if Lizzie slaughtered them because they’d become… zombies?