Meant to Be SPOOKED - When Love is #Supernatural #halloween 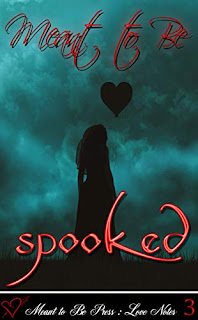 Today we have a teaser of a "spooky love" story from the new anthology, Meant to Be... SPOOKED.

An anthology of otherworldly love stories from Meant to Be Press authors.
Meant to Be…SPOOKED
Available now on Amazon.

Have you ever wondered what it would be like to find not only a magical spring, but a handsome man to go with it?


If not for the magic embroidered into her tattoos, Cherry would already be dead. Isaac’s life revolves around duty and protection, so he hardly has time for the rockabilly woman bringing chaos to his mountain. Sometimes, a little chaos is a wake-up call. Too bad what Cherry wants is at odds with what Isaac has to give. His secrets might be worse than hers.
H.E. Roulo’s “Cordial Foe” excerpt begins when Cherry is brought back to Isaac’s remote cabin after falling into an icy stream on Mount Rainier. Not at all shy, the rockabilly Cherry sets out to learn more about her hermit rescuer, and have some fun along the way.
Check out this excerpt for a taste of what “Cordial Foe” has to offer.

“You need me to get in there?” asked Cherry
“I can cook,” Isaac said.
“I like you better already.”
He eyed her figure.
She lifted her arms to re-pin her hair, which not incidentally did nice things for her bosom, only to find all but one pin had all come out. The rest were likely swimming in currents down the length of Mt. Rainier right now.
“You should shower. That water wasn’t good for you. My robe might fit you.”
He’d been guessing her measurements against his ratty old robe?
Deflated, she set her hands on her hips. “Water looked clear when we left, though, didn’t it? Got to be glacier-fed, right?”
“You stirred up the bottom when you fell in.”
Doubtful, she accepted two towels. “You the only one here, hermit?”
“Isaac. And yes, abandoned and forgotten by everyone but you.”
“All right, all right.” A shiver raced over her skin. He’d been so deadpan, it rang like truth. She crushed the towels to her chest. “A hot shower sounds good.”
She backed into the bathroom and slammed the door. Leaning against it, she pressed the towels to her face. Isaac was a new and disturbingly intriguing problem. She was safe from the fire she’d kindled in Seattle, but this might be an out-of-the-frying-pan and into-the-fire type situation.
“Jesus, I’m starving.”
The towels smelled good, but fortunately not like food. She inhaled, enjoying the scent of fresh laundry.
He tapped on the door behind her back. Cautiously, she opened it.
“My go-bag!” She accepted the red backpack from his hand and shoved the door shut again. Or tried to.
“Go bag?” he asked through the opening.
“For when you’ve got to go. Emergency supplies.”
“I’ve heard of them. Like for natural disaster or nuclear war. Anything I should worry about?”
“I’m a hipster. All my calamities are homemade.” She shoved, despite the obvious futility.
Laughing, he allowed the door to close.

“Parsers and Prejudice” by Emmy Z. Madrigal
Sometimes digital love is all you got.
In a future world, where men are all but extinct, Laney falls in love with her only companion, a male android built to meet her every need. But when a deadly virus sweeps the bot population, she must do everything she can to save the bot she loves.

"Cursed by Cupid" by Naching T. Kassa
Nothing is scarier than love.
Jane Sanders is a professional matchmaker and her new client is to die for. Henry Roberts is a handsome and charming Englishman, someone every woman would want. There’s just one problem. Henry is also ghost, cursed to appear as each woman’s nightmare. Can Jane aid him in his hunt for true love? Or will she experience her first failure and condemn his soul to hell forever?

“Cordial Foe” by H.E. Roulo
Magic isn’t found, it’s made
If not for the magic embroidered into her tattoos, Cherry would already be dead. Isaac’s life revolves around duty and protection, so he hardly has time for the rockabilly woman bringing chaos to his mountain. Sometimes, a little chaos is a wake-up call. Too bad what Cherry wants is at odds with what Isaac has to give. His secrets might be worse than hers.