'Tis the Season to read spooky! Okay, it's all the time, but indulge me!
More great horror and Halloween-flavored anthologies
and books for your reading pleasure!

Fantastic Tales of Terror: History's Darkest Secrets, Jonathan Maberry, Kevin J. Anderson, Christopher Golden, Bentley Little, Lisa Morton, and others - Twenty-four stories from noted horror authors. Stories of the secrets of history and alternate tales from the real story of the sinking of the Titanic to the horrorific lengths people went to during the Great Depression in New York City.

Handbook for the Dead, Pamela K. Kinney, Jacob Floyd, Jenny Floyd - A look at haunted locations, information on the sites, plus insight on the paranormal. Non-fiction. 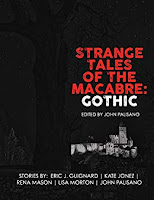 Doll Manor, (Lucifer Falls Book 2), Chantal Nordeloos - Someone is working to break the seven seals of the Apocalypse. Is Angel Manor the last one?

The Daemon Device: Book One of the Enchanter Chronicle, Jeri Westerson - London, 1891. Dirigibles, steam powers and strange murders... Magician Leopold Kazsmer, the Great Enchanter, is a man of secrets, including the ability to summon demons and perform real magic. Now he must discern what is behind a rash of revolting murders.

The Institute, Stephen King - Luke Ellis's parents are murdered and he's kidnapped, waking in a room that looks like his. Except here, other kids like him with special "talents" - telepathy and telekinesis - are subjected to having their gifts extracted - no matter what it takes. And escaping seems impossible. (Ooh, I have to read this next. Sounds like another version of Firestarter!)

Life is Short and Then You Die: Mystery Writers of America Presents First Encounters with Murder,  Barry Lyga, Caleb Roehrig, Emmy Laybourne, Jonathan Maberry, R.L. Stine, Rachel Vincent, Y.S. Lee, and others.  - Murder mysteries add a sinister spin to the firsts in life, from high school clique "backstabbers," to finding a body on the way home from school...

The Dead of Summer  (Piper Maxwell Book 3), Jean Rabe - Latest in the Piper Maxwell series has the new sheriff tested to her limits with a county fair accident and a horrific murder.

A Warning in Blood: The Vampire Inquisitor Series, Joseph R.G. DeMarco - Dru is not a commonplace vampire – he’s an Inquisitor, chosen by the elders of a most sanguine and secret society. His role is to investigate sedition and punish treason among the undead, of whom there are clans, factions, and territories. He’s made enemies over the centuries. He’s dealt with many of them using the help of myriad assistants, including gargoyle spies. But now a mysterious force has broken one of the cardinal rules governing vampire society.

Legion of the Undead: Special Extended Edition, Michael Whitehead -  (Pre-order, Releases Oct. 19) New reworked edition of the greatest empire on earth, the ancient Romans vs. the undead who would destroy them. Include a new chapter answering a previously unanswered question, plus two new short stories, Pirates, and Demons, and a previously released story, The Fort.

Lizzie Borden, Zombie Hunter, C.A. Verstraete - (On sale!) A dysfunctional family, greed, murder... and zombies? In August, 1892, Lizzie Borden took an axe... what if she did it because her father and stepmother had already become... zombies?

Undead Worlds 3: 16 new stories to sink your teeth into! (Get other links here.)