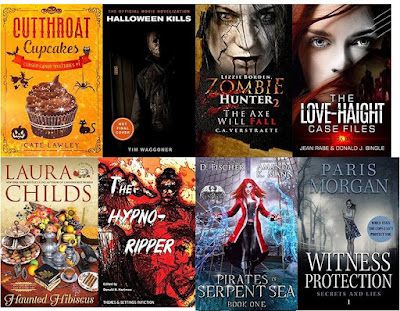 Happy July! Plenty of good reading to celebrate this month, so dig in!

It's never too early!!

Past the Glad and Sunlit Season: Poems for Halloween, K.A. Opperman -  Tricks and a few poetic spooky treats for the season!

Night Terrors and Other Tales, Lisa Morton - Twenty tales chosen by the author from three decades of exploring the dark side.... Tales of one of the wealthiest men searching for his fate as he rots within, to a near-future Halloween party, and a classic artist's engravings revealed to be a horrific instruction manual, and more...

The Valancourt Book of World Horror Stories, Volume 1 - Horror is indeed world-wide, judging from this collection from authors from 19 continents. Includes 20 stories published in English for the first time. A translated novelette from the collection is a recent Shirley Jackson Award nominee.

The Hypno Ripper, 2 Victorian Era Tales of Jack the Ripper and Hypnotism, Donald K. Hartman -  Reprints of two little-known stories once published in major newspapers in the late 1800s. Includes an interesting biography of one of the authors, Dr. NT Oliver, a pseudonym of Edward Oliver Tilburn, a Victorian con-man and once editor of Rand McNally and a secretary at the Chicago's World's Fair.

Cutthroat Cupcakes, Cursed Candy Mysteries Book 1, Cate Lawley - (Free at time of posting.) A wizard detective arrests Lina for witchy crimes. She has to prove her innocence and learn to control her magic. Killer cupcakes seem improbable to Lina, but when an attractive detective snaps cuffs on her and accuses her of witchy crimes she's forced to reconsider.

Haunted Hibiscus, Tea Shop Mystery #22, Laura Childs - The week before Halloween, Theodosia Browning, proprietor of the Indigo Tea Shop, and her tea sommelier, Drayton, are ghosting through the dusk of a cool Charleston evening on their way to the old Bouchard Mansion. Though Timothy Neville, the patriarch of the Heritage Society, and owners of the mansion is not thrilled with the fund-raising idea, it is the perfect venue for his grandniece, Willow French, to sign copies of her new book, Carolina Crimes & Creepers. Then Willow is found dead and Theodosia's boyfriend, Detective Pete Riley, is sent to Willow's apartment to investigate. But minutes later, he is shot and wounded by a shadowy intruder.

Fighters of Fear: Occult Detective Stories - Collection of the best of classic and new stories from the gaslit era mixing detective tales and supernatural fiction. 748 pages.

Pirates of Serpent Sea, D. Fischer and Amanda K. Mann- Remini Draven loved being a pirate. She enjoyed plundering villages and discovering legendary treasures just as much as the next guy on the Black Moon ship. But, when a deal was struck between the Captain of the Black Moon and a sniveling merchant, she walked away from life on the Black Moon. The merchant wanted the Black Moon crew to steal an amulet that will destroy the sirens. Remi refused to be part of it. And now . . . now she has to find a way to save the sirens before the Black Moon reaches them, and the amulet.

Magic has returned to the world and with it a host of supernatural creatures—not just vampires and ghosts, but sentient gargoyles, ghouls, sprites, faeries, and more. The frightened citizenry, holier-than-thou bigots, headline-seeking reporters, and harried police refer to them as OTs (Other-Than-Humans), but Thomas Brock and Evelyn Love believe even supernatural creatures have legal rights.

Witness Protection: Secrets and Lies, Book 1 , Paris Morgan - (Releases July 18) When people say to kill them with kindness, I don't think they mean literally...Witness to one murder in New York, I'd been relocated to Texas of all places. As I try to settle into a routine, I'm confronted with danger yet again when my friend is assaulted and her daughter needs be protected. The cops aren't on our side and running away isn't an option. How can we stay alive when all of the secrets and lies threaten to overwhelm us?

Lizzie Borden, Zombie Hunter, C.A. Verstraete - Think you know the Lizzie Borden story? You know... Lizzie Borden took an axe.... She was acquitted but... what if she did kill her father and stepmother for a good reason? Because they'd turned into.... zombies! Follows the real-life events of the trial with some twists!

The  Adrian's Undead Diary Omnibus, Vol. 1, Chris Philbrook - First four books of the eight-book series. The world crashed to pieces in 2010 and Adrian Ring wasn't anywhere near ready. This is the story of how he survived. 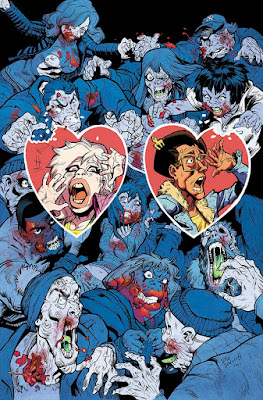 Zombie Date Night, A horror-comedy comic by Steve Urena - See Kickstarter page.Coming this summer, feast your eyes on Zombie Date Night. A 32-page comic book that tells the story of: Boy matches with girl.  Girl meets up with boy for a first date.  Boy and girl face a ZOMBIE INVASION!

Zombie Fallout, Mark Tufo - Book 1 of 17 book series - The H1N1 virus is running rampant and suddenly people are coming down with strange effects, die, and then are reborn with a taste for brains and human flesh after being vaccinated.