I don't dream about zombies often (which may or may not be surprising to you), but when I do, it's usually because I'm stressed out about something.  Zombies don't really scare me.  Granted, if they really existed, that might be a different story.  But they don't, and I've seen so many movies, read books, written about them, and researched them, there isn't much mystery left in the creatures.  But when I dream about them, it's incredibly stressful, mainly because I'm fighting something that can't be destroyed.  It's like trying to run away in a dream and being unsuccessful.

One of the other elements that is present more often than not in my dreams is that I'm at my parent's house when the undead attack.  I have no idea why I'm at their house; I haven't lived there in YEARS.  The nice thing about being there, though, is that we (and we always varies--sometimes it's my family, sometimes it's strangers) always fortify the house so zombies can't get in.  We're always safe.  I think that might be part of the reason the house is so prominent in my dreams.  No matter what is going on outside (zombies), there is always a safe place I can be (the house).  There is comfort in that.

I think the worst zombie dream I ever had was one where my kids were involved.  We were at my parent's house, and the boys desperately wanted to go outside and play.  For obvious reasons, we were stuck inside.  I was tired of listening to their whining, so I was going to let them play out back in the dog run (it's enclosed by a chain-link fence), but when I turned to open the back door, a zombie had its face pressed against the glass.  Classic horror movie stuff.  Needless to say, the boys were very sad about that, and that upset me more than the undead.

Like I said, I don't dream about zombies often, but when I do, they're usually really awesome ideas.  That's how Life After the Undead was born, along with two other stories that are in the works (I will finish them one day, but I can't tell you when--mainly because I have no idea!).  I had one earlier this week, and again it had some great ideas in it that I will attempt to incorporate into one of my stories.  Stressful or not, zombie dreams inspire me and keep me writing.  What's not to love about that? 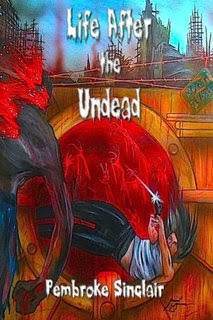 Posted by Pembroke Sinclair at 12:00 AM