There is a trend in the movie industry to convert old films into DVD format.  It’s a great trend; it allows new audiences to enjoy the classics and old audiences a way to watch their favorites.  When they convert them into this new format, they usually also make them high definition, which can be both bad and good.

A lot of old horror films don’t really translate well into high definition.  Most of them didn’t have large budgets, so their special effects might have been a little cheesy.  When they are converted to high def, this cheesiness becomes readily apparent.  The film gets dated, and sometimes it’s hard to watch.

Not all films have this problem.  In fact, I recently rewatched Day of the Dead (which is one of my all-time favorite zombie films), and it had been converted to bluray.  It was amazing how well the special effects held up.  You have to hand it to Tom Savini, he really knew what he was doing. 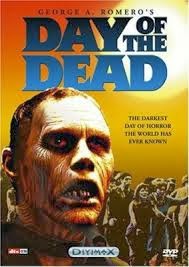 The blood, gore, and intestines looked fantastic on the screen.  The people were torn apart and it looked horrifically real.  It was what a zombie film was supposed to be.  It was so very exciting to watch.

I don’t mind CGI effects, they’re fine.  They’re part of the evolution of film making.  But there is something to be said for “the old way” with mannequins and gallons of red dye and probably entrails from the butcher shop.  Adds a sense of realism to the film.
Posted by Pembroke Sinclair at 12:00 AM