Includes my zombie story, "Second Chances" in the Baby Shoes: 100 Stories by 100 Authors 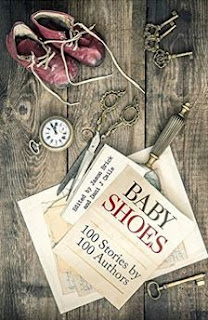 That weird old lady hoarder turns out to have the last laugh when zombies actually do appear.  When she goes to the day care in town, she spots the baby shoes in the hall and hopes she's not too late...

The strange flu came from nowhere. The news blared the rising death tolls hour by hour. Then came the panic and looting, especially once the real disaster became clear—the dead didn’t stay dead.

Lucky for me, being the “crazy hoarder” in the rundown house on the hill has some advantages: the zombies have easy pickings of the panicked citizens below, and I have a house full of goods. With everything I could need on hand from ointments and paper goods, to baby items, and all kinds of food, along with my rain barrels and homemade solar panels, I almost never have to leave home.

As I stood on my roof, rifle in hand, and watched people fleeing and trying to fight off the ghoulish hordes, something hit me. The fate of the adults didn’t matter. Heartless it might sound, but I knew it was them or me. But what about the truly helpless and defenseless? I didn't want to go out, but I couldn’t stop thinking about the day care center in town. I had to find out what had happened there.

I headed inside and threw some supplies into my backpack, my eyes drawn to the old box of baby clothes on the shelf. This time, instead of making me mourn my own loss, it filled me with purpose.

The back roads remained empty, most of the action centered along the main streets where people frantically tried to escape the encroaching undead. My ancient but reliable van putted up and around the hills, my luck holding as I encountered only a few ghouls wandering here and there. They turned and moaned at sight of my vehicle, then shambled after it at a snail's pace. I let them be, not wanting to draw others with the sound of gunfire.

To my relief, the downtown appeared pretty deserted as well, due to most people having been at work or home sick with the flu. The worst part is that many died at home, alone and forgotten, until they emerged undead.

Posted by CA Verstraete at 4:52 PM