It is Finished! The Mind Over Trilogy


by Karina Fabian
Like so many authors of zombie fiction, it’s not the only genre I write. Much as I love writing about Neeta Lyffe removing zombie heads and not bothering to take names because they’re Reanimated Post-Consumer Bipeds, plenty of other stories plague my mind.

I’m proud – thrilled – relieved - to announce that one such story has now come to its conclusion, with my latest book, Mind Over All. 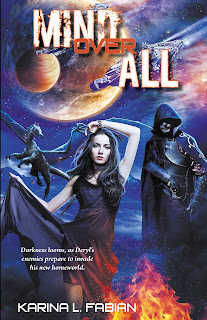 Mind Over All finishes the Mind Over Trilogy, which follows the adventures of Deryl Stephens, a psychic whose powers drove him insane, and Joshua Lawson, a psychiatric intern and Deryl’s best friend. In Book One, Mind Over Mind, Deryl finds his way back to sanity with the help of Joshua – and guess what? The voices in his head are real, not only the thoughts of the people around him but also of two aliens who are leaders on opposite sides of a war and want to use Deryl to help them secure victory.

In Book Two, Mind Over Psyche, Deryl escapes the asylum and teleports to one of the planets. There, they meet Tasmae one of the aliens, who is now going crazy herself thanks to Deryl’s influence. (Lots of crazy in the books, but I think her crazy was the most fun to write.) Deryl helps her find her way back to her own mind again. They fall in love, and he breaks free of the influence of the other alien, Alugiac.

Now, in Book Three, Mind Over All, Deryl and Tasmae are married and expecting their first child, but instead of a happy ending, the two planets themselves are in danger. Tasmae may be able to prevent the other world from crashing into theirs, but only at the expense of her life, the life of their baby – and about half the population of their world. Deryl must find a way to save both worlds before he loses the people he loves best.

This was a story I first started thinking up in college, nearly 30 years ago. Fifteen years later, I took that college novel, destroyed it, reconstructed it from the foundation into the trilogy, and wrote the first novel. Now, at long last, I have written the final words – plus a novella to finish Joshua’s storyline and get him hitched to his longtime fiancé. There may be other stories later, but for now, everyone got their happy ending, and I can set it aside.

If you’re interested in reading some of my non-humor works, please check out the series at http://fabianspacecom. 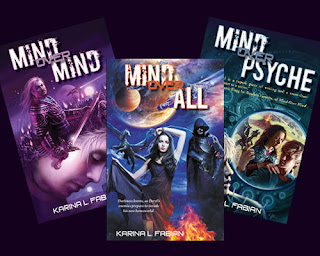