The Girl with All the Gifts by M.R. Carey

A while ago, I posted about some zombie books I had found. Well, I finally had a chance to get through one of them, and I wanted to share my thoughts about the book.

A friend on Facebook recommended this to me, so I went to Amazon to check it out. Mystery surrounds what the book is about, and the description is vague yet intriguing. Here’s what it says:

Melanie is a very special girl. Dr Caldwell calls her "our little genius."

Every morning, Melanie waits in her cell to be collected for class. When they come for her, Sergeant keeps his gun pointing at her while two of his people strap her into the wheelchair. She thinks they don't like her. She jokes that she won't bite, but they don't laugh.

The Girl With All the Gifts

is a groundbreaking thriller, emotionally charged and gripping from beginning to end. 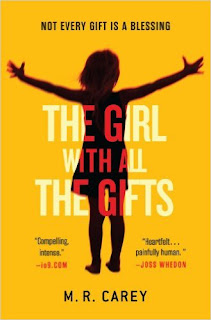 Even in the reviews there’s this desire to keep the story a bit of a secret. I understand why. It makes it more intriguing, but at the same time, I bought it knowing it was a zombie novel (and now you know too), and I don’t think knowing that took anything away from the thrill of the book.

There are several other twists and surprises throughout the story, but I won’t reveal what those are. They have to be experienced first-hand to truly be appreciated.

What I will say is that this story was amazing! The author did an awesome job of creating a post-apocalyptic world that I haven’t seen before. He developed characters that I cared about and became emotionally attached to. By the end of it, I was smiling and pleased with the outcome. I got chills because the book made such an impact and impression on me.

There were a few stereotypes in the story, especially when it came to how science and scientists or the zombies were portrayed, but that was expected. There are certain tropes that exist within the genre, and I fully expected them to be there. However, I was pleasantly surprised that he undermines a few of those expectations later in the story.

If you’re looking for gore, this may not be the book for you. There’s some, but it’s not over the top—which often occurs in zombie books and films. There’s violence, but it’s not horrific. And if you’re reading a zombie book, you expect it to be there anyway.

I would definitely recommend this book, even if you aren’t a hardcore zombie fan. It deals much more with the human side of the zombie situation and focuses on my favorite question: What does it mean to be human?
Posted by Pembroke Sinclair at 12:00 AM

Email ThisBlogThis!Share to TwitterShare to FacebookShare to Pinterest
Labels: m.r. carey, pembroke sinclair, the girl with all the gifts, zombie book review