Lizzie Borden, Zombie Hunter is Book of the Day! 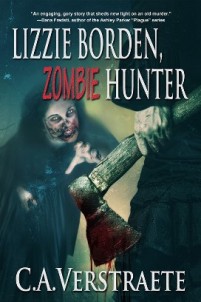 Hey, hey! Today - Lizzie Borden, Zombie Hunter - is the Book of the Day at
at Bookoftheday.org. Check it out! Also see the horror category.

Every family has its secrets…One hot August morning in 1892, Lizzie Borden picked up an axe and murdered her father and stepmother. Newspapers claim she did it for the oldest of reasons: family conflicts, jealousy and greed. But what if her parents were already dead? What if Lizzie slaughtered them because they’d become zombies?Thrust into a horrific world where the walking dead are part of a shocking conspiracy to infect not only Fall River, Massachusetts, but also the world beyond, Lizzie battles to protect her sister, Emma, and her hometown from nightmarish ghouls and the evil forces controlling them.
Posted by CA Verstraete at 12:00 AM