#A to Z Blogging: G for The Goodbye Family

If you like the old weird west, this is a fun idea. (Check out this cool animation!) 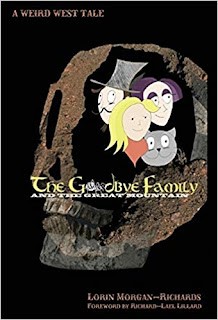 The Goodbye Family by Lorin Morgan-Richards is a unique, illustrated novel featuring a family of... undertakers....  (Hey, there are zombies, too!) Read on for a short interview with the author.

The Goodbye Family and the Great Mountain follows the lives of Weird West undertakers Otis, Pyridine, and their daughter Orphie. Pyridine is a witch and matriarch mortician, Otis is a brainless but bold hearse driver, and Orphie is appointed grave digger for her strength of twenty men. Through bumbling, Otis discovers his neighbors are turning into zombies, a mystery that is directly affecting their burial business.

In their backyard cemetery, they travel to the underworld for answers and uncover a plot to surface the evil entities that would otherwise burn in the Lake of Fire, have risen again through oil pumps that are bottled up as a tonic medicine for the ground above. The tonic goes fast, and the host takes over the body when the body perishes. Can the Goodbyes hilarious gaffes and revelations plug up the works? Find out in this fast-paced carriage ride through the underworld. The story includes an exclusive foreword by entertainer and medium Richard-Lael Lillard.

Got a copy of this fun book from the author so I'll be reviewing it later. I love that it has original drawings in it.

* This is fun. See the fictional town and the inhabitants' drawings at the website. Click around the map to visit the various locations.

* He also has a Wikipedia page about the book.


How long have you been drawing?

Professionally since 2009. However, I started as a child when I would use drawing as my main filter for expression. I struggled with dyslexia and just about every note for class had a doodle beside it.

Where else has your art been published?

Before I started A Raven Above Press, I was published in a few zines and indie publications. I learned how to do guerrilla marketing and promotion through various projects I founded and co-founded, the most profound being Celtic Family Magazine that was distributed internationally and was in major chains across the US and Canada. The magazine took a lot of work, but I learned from it. One of my mentors of DIY publishing was publisher and author V. Vale of RE/Search Magazine who I first met at the Alternative Press Expo in San Francisco.

How did you get the idea for the book?

The Goodbye Family and the Great Mountain is a sequel to Me’ma and the Great Mountain. While Me’ma, is about an Indigenous child who overcomes her fears to battle an evil tyrant by using traditional knowledge, the Goodbye family exist in the same world as the town undertakers. I thought up the Goodbyes in 2009 on the streets of Paris. I took a journal on the trip which also included Oxford, London, Cardiff, and York. The trip itself had many inspiring themes that played into the book.

A few years ago, I became close friends with a talented medium Richard-Lael Lillard who provided the foreword.
Was the art first or the story?

The original notes included Orphie, a daughter who was adventurous and had super-strength. The illustration followed with her sitting atop the Notre Dame Cathedral beside a gargoyle. Otis, a quirky undertaker, who was illustrated going through customs to board a train with shrunken heads and a casket. Pyridine, a matriarch of the family and funeral director, was sewing a cadaver arm in Cardiff.

For the book, the story came first also but has evolved over the nine years it took to write. Then, nine collections and nine hundred comics helped develop the story further.

What inspired the whole concept?

I have vivid dreams that bring forward ideas  and when my daughter Berlin was born two years after Orphie was created, she helped fill out Orphie’s personality quite a bit. My wife Valerie and I have always been into what some might consider goth or darker motifs. We met at goth club after all in 1996 (it is called the Phantasy Nite Club). Additionally, her grandparents had a funeral business.

Likewise, with a passion for the victorian era and Old West it was easy to build on Otis and Pyridine’s characters. Just like the Goodbyes, we laugh a lot and I believe humor bridges the weight of serious reflection. That said, the serious themes in the story include our dependence on oil and societal controls. As Me’ma in my first book uses traditional knowledge to overcome barriers, the Goodbyes use a touch of disorder and ability to laugh in the face of danger. Not to mention their love of the macabre.

I live in California, specifically in Los Angeles near CBS Studios where they filmed the TV series, The Wild Wild West, with the late great Robert Conrad (not the Will Smith film), a major influence on me and the Weird West genre.

What work did you do before this or still do?

My career used to be in music, producing my own musicals and working for Caroline Distribution in New York. I had to abandon this dream to follow another when 9-11 led to a job loss and my finances couldn't  keep up with the expense. I turned to writing and illustrating, and traveled across country with my wife to start a new chapter in my life. I began working at an art gallery in Westwood, California and got to know the business while studying their many catalogs of art, honing in on the Surrealists. I started to craft my first novel here and would visit the nearby UCLA library to do research for my ideas.

I then received an Anthropology degree from California State University, Los Angeles where I studied both folklore (my focus was ghostlore) under Dr. Elliott Oring, a key scholar in the field, and Native American studies. I followed a path in museums and currently work at the J. Paul Getty Trust.