The Serpent and the Rainbow

I'm sure many of you are familiar with the movie of this same name, but did you know it was based on real scientific work?


Wade Davis is an ethnobiologist who went to Haiti specifically looking for the zombie poison.  And he was successful.  He figured out exactly what the poison did.  But there's more to it than that.  There's a whole sociological aspect.  The book was wonderful.  It read like fiction, and I had to remind myself several times that it wasn't.  As a zombie fan, I totally recommend checking it out.

I also sent Mr. Davis an email a while back.  He was kind enough to respond and recommended I check out his other book.  I'm going to.  I bet it's fascinating!

I'll be honest, I have never seen the movie.  I know, I know, it's been out forever.  Rest assured, it's on my list, and I can't wait to see how they made it.  I know that it's based on Mr. Davis's excursions, but I'm going to guess Wes Craven took a few liberties.  Still, it's research, so I'm excited! 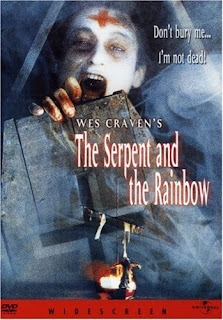 I kind of want to know what Mr. Davis's reaction was to the movie.  Maybe he'll be kind enough to indulge me in an interview after I've finished watching it!
Posted by Pembroke Sinclair at 12:00 AM

Email ThisBlogThis!Share to TwitterShare to FacebookShare to Pinterest
Labels: pembroke sinclair, research, the serpent and the rainbow, zombies