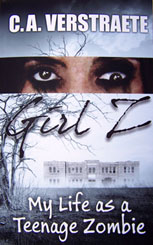 Today is DAY 3 of the
GIRL Z: My Life as a Teenage Zombie
BOOK LAUNCH BLOG TOUR!!!!

Today I thought I'd try something different.  I'm including a few short, previously unreleased excerpts from the book  to whet your appetite.

1. So much is made of what zombies eat, namely us. But in GIRL Z: My Life as a Teenage Zombie, the main character, Becca, is part-Z for zombie and yet still human. So what does she eat? Well... without giving it away, here's a hint:


I gulped down the slimy chunks, fighting the gag reflex as I continued to slurp and chew, the globs of fat encircling my mouth. I chewed, burped and licked my lips, not caring about anything, or anyone, except the here and now.


I had only one thing on my mind—stopping the raging, blinding hunger.

2.  What is life like for a girl who is not only 16 (with all the problems that go with being a teenager), but who becomes a  part-zombie?

Sure I had the wandering eye problem and tripped over my own feet, but so far, most of my problems were somewhat tolerable, considering everything. Not so for most male Zs, I saw. Carm and I exchanged horrified glances as we watched the rude, obnoxious way several of them acted, hoping it was a rare occurrence. Hardly.

The virus amplified the endless eating cycle teenage boys usually had. Even with all the protein drinks, I watched several stagger down the hall slobbering over packages of raw meat when they weren't slobbering over girls. Ugh. I wanted to laugh, and would've, if it wasn't so revolting.

3. One more:  So what are the other, full-zombies like in Becca's world?

Naturally, they're all as different in "undeath" as they were in life, but here's a glimpse in one scene:

I gunned the car and twisted the steering wheel, the thing trying to hang on before it fell in a heap as we revved off. In the rearview mirror, I watched it stumble and stagger around in a circle, acting like it could catch us.

My calm broke in a torrent of curses when two more of them lurched from the trees at the side of the road and waved at us like long-lost demented friends.

* So, what do you think? Be sure to leave a a comment!

And prizes! Have we got prizes!! - Pix on Day 1 post
(* See Rafflecopter link if doesn't load.)

a Rafflecopter giveaway
Posted by CA Verstraete at 12:00 AM