Bullying--from a Zombie Point of View

Bullying seems to be all the talk today, kids getting bullied or being bullies. Even big strong football players supposedly being bullied to "toughen up."

Where there is one person who thinks they are: better - stronger - prettier - cuter - smarter - thinner - better dressed - you name it - than another, there will be bullying. It's gone on for decades, maybe even centuries. (Surely, you don't think that little guy Napoleon didn't get picked on at some point in his life?)

I remember my mother telling me how she and her sister got picked on, and how they were called ugly names for various reasons. And that was in the 1920s growing up!

Sadly today, some kids don't think there is a way out and pay the ultimate price by killing themselves, which is never an answer.

In actuality, I don't think there are too many people who haven't been picked on at some point in their lives except for maybe those in the "cliques" - the cheerleaders, the football stars, the athletes, whoever was in the group at the top of the pack. But I'll just bet many of them suffered some kind of problems, too; they just took their self-hatred or other problems out on others or looked down on others, not that that is any excuse for such behavior.

No one is perfect --  or they are too egotistical and are kidding themselves.

Bullying is one of the themes that came out in my book, GIRL Z: My Life as a Teenage Zombie. After all, what can be worse than ending up as what many would say is a "freak" - a mix of human and zombie. Becca is infected with the Z virus and becomes a part-zombie with odd quirks and traits no teenage girl wants to be noticed for.

And sadly, she gets picked on, ridiculed and insulted even by adults who should clearly know better.

The message? She survives.

She has bigger battles to fight like finding her and her cousin's missing mothers, and figuring how to keep her family safe while hoping for a cure for herself. Is her life perfect? Far from it. But she finds hope and purpose in helping her family, in working to protect them, in looking outside herself and beyond her problems. She has her cousin to think of and others who care about her.  And maybe there is even a hot guy in her life, something she never expects to happen.

That is how she survives--and how others facing this same situation can too. 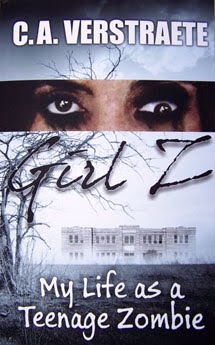 Excerpt from GIRL Z: My Life as a Teenage Zombie:


My mind barely registered on Carm's chatter as we drove down the side streets and headed for Windale High. It didn't even bother me when she shoved me and my eye twirled. Not even the sight of several military Jeeps out front and Guardsmen stationed around the school put me as on edge. This was more nerve-wracking than going to school the first day as a freshman. What would my old friends say once I showed up? Who'd be here?
Who would be different, like me?
Once inside, we waited for what started as a pretty boring half-hour in the main office while my aunt met with the principal. To my surprise, I saw quite a few other kids who'd been changed by the virus, actually more than I expected. I shrank back and watched, my uneasiness growing as some of the usual teasing turned meaner. Only a security guard interfering got several of the boys going their separate ways.
Carm and I glanced at each other when one of the men behind the desk turned and glared at us. Another woman's muttering made it clear she wasn't happy either about the changes, namely, kids like me. The bad vibes in the room grew stronger. I'd almost considered acting sick so we could leave when Tia's voice interrupted my observations. "Okay, girls, you're all set. Here are your schedules. I'll pick you up at two-thirty. Bec, if something isn't going right, or you need to come home, the principal is making allowances. You should tell your teacher and they'll let you go to the office. They told me that, uh, special students are being classified under federal disability guidelines, so you'll get more consideration if anything is wrong. Have a good day, honey. I'll see you both later."
Carm gave me a shove, (I didn't need to ask why), before she unfolded her schedule for us to compare. "We'll be fine, right? Looks like we have several classes together, English and—."
We both noticed the difference in our schedules at the same time—mine had a big red Z on the top. It wasn't until we turned the corner that we noticed something else new: guards at the end of the hall, metal gates behind them cutting off what used to be the art and band rooms. The guards checked schedules, directing most of the students down the other hall.
My cousin drew a lot of admiring glances, which didn't surprise me, but I stared at the floor when a group of guys laughed and threw crude comments my way. Carm glared at them and pulled my arm, urging me to pick up my pace.
As if everything else wasn't bad enough, since my transformation, I'd started walking sometimes in this weird, loping gait, which, every now and then, left me an embarrassing few steps behind everyone else. I'd become the female version of the Wolfman slinking along on his hairy tiptoes.
Carm pulled my arm again. "Cuz, c'mon, hurry up, ignore them. Ignorant pigs. Don't let them bother you."
We found my locker. My back to the hall, I pretended to fiddle with the lock as a couple other guys passed and stared at us. "Carm, this is harder than I thought. I don't know if I can do it."
I zoned in on a spot across the hall as one of the geeky guys who used to sit behind me in chemistry wheeled around and stared, his face a stomach-turning road map of acne and Z scars. Ugh. I tried not to gag. The Z virus had only made things worse for him.
Carm whispered while she fiddled with her locker. "Bec, don't worry. Things'll get better. It won't be bad. Honest."
I shook my head, feeling even worse when I saw Jimmy Churlin stagger down the hall, heading our way. Holy cow, the virus seemed to have done a number on the guys around here.
Jimmy made one ugly being, all drool, and even fewer manners than before.
Grimacing, I watched him make a rude comment to one of the girls who sashayed by, hips wiggling in an attention-getting tight skirt. I'd have thought the virus would have toned down some of his less desirable traits. Day by day, I'd noticed most of my deadened senses had returned even though they stayed at more muted levels. Like I could taste food again (sometimes), but it usually didn't taste like it once did (or stay with me) for long.
Sure I had the wandering eye problem and tripped over my own feet, but so far, most of my problems were somewhat tolerable, considering everything. Not so for most male Zs, I saw. Carm and I exchanged horrified glances as we watched the rude, obnoxious way several of them acted, hoping it was a rare occurrence. Hardly.
The main thing on most teenage Z's brains (the little they had left, of course) these days was food, followed by sex, a horrific combination.
The virus amplified the endless eating cycle teenage boys usually had. Even with all the protein drinks, I watched several stagger down the hall slobbering over packages of raw meat when they weren't slobbering over girls. Ugh. I wanted to laugh, and would've, if it wasn't so revolting.
"You'd think they would've put those guys by themselves," I whispered to Carm.
She glanced down the hall and nodded. "I know, they're so gross. Maybe Principal Thomas got scared he'd be sued?"
I shrugged. "There're more parents with non-infected kids. If he's watching, and I bet he is, once he sees what's going on he'll have the guys reorganized this afternoon. I don't know how that'll affect the few girls I've seen like me."
"All right, get moving," a security guard ordered several guy Zs. "You there, let's go."


Another guard moved in and hurried the other Z boys along towards the end of the hall. A teacher peeked out from behind one of the doors, grimaced, and seeing me watching, gave a hateful glare before she ducked back into her room.
Posted by CA Verstraete at 12:00 AM