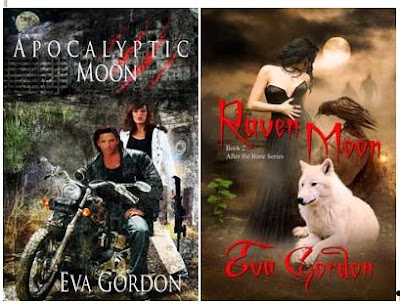 (After the Bane) and the recently released book two, RAVEN MOON


About Apocalyptic Moon:
Dr. Dora Adler's life has been in disarray since the beginning of the zombie apocalypse, but when she gets bitten by one of the undead, her whole world is turned upside down. Held captive in a secret underground lab, the tall, muscular hunk in the next cell is her only hope for salvation. Unfortunately, he claims to be a werewolf. Yeah, and she's supposedly a witch.

Dirk Gunderson is an alpha Arbor pack werewolf. Captured and collared, he's sold to the zombie lab in hopes his blood serum can create a vaccine. He needs to escape, but not without the hot little brunette witch. In the midst of enemy werewolves and the hordes of undead, Dirk and Dora's sexual tension ignites a blaze hotter than the desert highway. Along their journey, they battle the inevitable: a werewolf must never take a witch as a mate. - from Amazon.com


In a world ravished by zombies, animal shifters vow to save human survivors and combat zombie hordes. Ravenna, princess of the northern raven conclave, joins forces with witch Dora Adler and the Fenrir werewolf pack. On a mission for a vaccine against Z-phage, Rave and her team fly to a remote biological research facility. They battle a new breed of zombie, faster and stronger than the human variety, and with an appetite for shifters.

Benandanti Templar Maddox seeks revenge against the Kindred leader who killed his team. He rescues a trapped woman, Ravenna destroyer of the Benandanti bloodstone. His wolf longs to claim and protect the sexy raven shifter. His Benandanti faith commands she stand trial.

While facing zombies, merciless tankers, and zealous Benandanti werewolves, Rave and Maddox struggle against their forbidden passion. They must set aside their conflicts and strike at the new zombie threat before the new virus spreads.  - from Amazon.com


What do you want from life?
Survive the zombie hordes, and reach California to find my brother and his daughter. Escaping with a werewolf is a definite plus, however, a pack of enemy werewolves want me dead for being a witch. And, here I thought my only worry would be billions of zombies

If you were granted three wishes, what would you ask for?
A cure for the Z-phage, Peets brewed coffee, and place where I can practice medicine again.

What three things would you take to a Desert Island?
A sailboat for easy escape. Since Z-phage has reached even desert islands, I would bring along my weapons and my hot badass zombie-fighting werewolf along.

How do you decide if you can trust someone? Experience with others? With this person? First impressions? Intuition? Do you test the person somehow? Or are you just generally disposed to trust or not to trust?
I used to be more trusting, but since the Z-phage pandemic, people are in survival mode and will kill for a tank of gas. My trust in humanity dropped to level zero after kept in an underground lab by a mad scientist determined to find out why I am immune to Z-phage.

What's the worst thing you've ever done? Why?
Killing zombies. As a doctor, I want to heal the diseased but when your patient sees you as their favorite subway sandwich that’s where I draw the line.

What are you most afraid of?
Apparently because I’m a witch, something I just recently learned, I’m immune to becoming a zombie. My biggest fear is being eaten while I’m still alive.

How do you feel about your life right now? What, if anything, would you like to change?
Scared and always on survival mode. I would go back in time and find the source for Z-phage and then nip it at the bud.

What makes you laugh out loud?
Falling in love in the middle of the zombie apocalypse with a werewolf. A werewolf who is forbidden to take a witch as a mate and one with a mate waiting for him when he returns to his pack.

What do you consider your greatest achievement?
Surviving this long. Call me in another week.

What is your idea of perfect happiness?
Finding the cure for Z-phage. I also fantasize about being with Dirk, but I know that’s not possible. A girl can still dream, right?

What is your current state of mind?
I’m experiencing a constant dose of an adrenalin high.

What is your greatest fear?
I fear the impossibility of stopping the billions of zombies. They exhibit some sort of herd behavior as they leave the cities in search of the living.  On a more personal level, I fear finding out my brother and niece have turned.

What do you most value in your friends?
Honesty, humor, and I’m starting to appreciate a man who can turn Hollywood Horror movie werewolf to combat zombies.

Which words or phrases do you most overuse?
I’m a Star Trek nerd, so I tend to overuse Star Trek quotes. Only when I’m stressed, though, which is pretty much all the time.

If you could change one thing about yourself, what would it be?
Learn more about my emerging witch powers. Maybe I can use this new gift to save the world.

Which living person do you most despise?
Dr. Mansfield who experimented on me.

What is your biggest regret?
Besides paying most of my student loans? If I’d known the zombie apocalypse was coming I would have gone to Paris, instead. On a more serious note, not doing my residency near my family.

What do you regard as the lowest depth of misery?
It breaks my heart to see zombie children.

What is the trait you most deplore in yourself?
My stubborn mind that doubts I’m a witch with powers.

How would you like to die?
Of old age, in the arms of, okay, this is wishful thinking; in my sleep with Dirk at my side.

If you were to die and come back as a person or thing, what do you think it would be?
The same person since I am apparently a witch, immune to Z-phage. Unfortunately, as a witch I’m hunted by the Benandanti werewolves. Fortunately, Dirk’s pack is more accepting. I think?

Witches are executed by the Benandanti pack when her powers awaken at age 27 years. I would go back in time and stop my mother from being murdered. She could have taught me more and maybe we could have stopped the Z-phage. Wait! Shhh. I heard something outside the door... 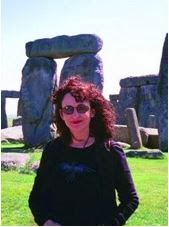 Eva has a BS in Zoology and graduate studies in Biology. She once taught high school Biology, Environmental Science and Anatomy/Physiology.

When not in her den writing, she can be found at steampunk conventions, zombie runs, at work at the raptor rehabilitation center, wolf sanctuaries, or to satisfy her inner Hemingway on some global eco-adventure.