This year marks the 125th anniversary of the Borden murders. I'll be posting and doing re-posts of different aspects of the crime. 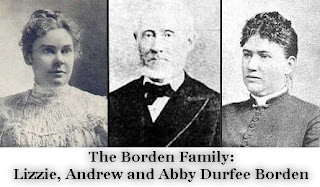 By Christine Verstraete
Most people today recognize the name of Lizzie Borden and her connection to one of the most heinous crimes of the 19th century. That on August 4, 1892, her father. Andrew Borden, and her stepmother, Abby Durfee Borden, were brutally hacked to death with a hatchet in their home. Even more shocking was that the dutiful, Sunday School teacher and spinster daughter, Lizzie, was arrested—and eventually declared not guilty—of the crimes in June, 1893. 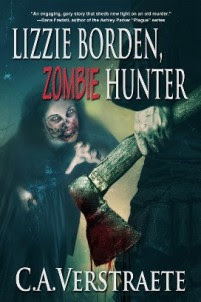 Many say she did it. Some say she was covering for someone else. The crime remains unsolved. But what if she did it… because she had no other choice?

Here, in a nutshell, is a summary of the crime as described in my book, Lizzie Borden, Zombie Hunter:

The Crime:
Then Lizzie spotted it: the worn hatchet Father had left behind after he’d last brought in the newly chopped wood. No, no! Her mind filled with horror, but when her stepmother came at her again, Lizzie whispered a prayer for forgiveness and grabbed the handle.

The Accused:
Everyone, of course, would read the later newspaper accounts and say what happened was barbarous, cruel, horrific— and that anyone who did such a thing (namely her) was a full-fledged monster.
The Trial:
What if she was found guilty? Would they—could they—hang her?

The Verdict:
“The trial is over, but my sentence continues. From day one, I have been hounded and watched, nothing has changed in that respect. Nothing.”

The Monsters:
It raised claw-liked hands at her—or rather stumps since most of its fingers were gone.

About LizzieBorden, Zombie Hunter:
Every family has its secrets...

One hot August morning in 1892, Lizzie Borden picked up an axe and murdered her father and stepmother. Newspapers claim she did it for the oldest of reasons: family conflicts, jealousy and greed. But what if her parents were already dead? What if Lizzie slaughtered them because they’d become… zombies?


Thrust into a horrific world where the walking dead are part of a shocking conspiracy to infect not only Fall River, Massachusetts, but also the world beyond, Lizzie battles to protect her sister, Emma, and her hometown from nightmarish ghouls and the evil forces controlling them.
Posted by CA Verstraete at 12:00 AM