Today I welcome author Kathleen Kaska, whose intriguing new mystery, Run Dog Run, centers on the world of greyhound racing and animals rights. It is the first book in the Kate Caraway Animal Rights Mystery Series. 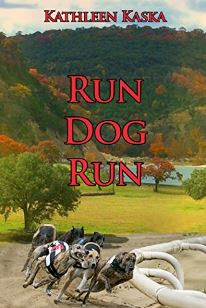 About Run Dog Run:
After five years in Africa, researching the decline of elephant populations, Kate Caraway’s project comes to a screeching halt when she shoots a poacher and is forced to leave the country. Then her friend's daughter becomes entangled in the world of greyhound abuse, and believes Kate is the only one who can uncover the crime and find out who is responsible. With her discovery of a body, Kate's in a race against time to find the killer--before she becomes the next victim…

What inspired the book?
Run Dog Run was my very first attempt at writing fiction. I wanted to write a story that was not only engaging, but made people think about animal rights issues, a cause I am passionate about. I had to rewrite the manuscript several times. My first attempt was too heavy-handed and I realized I preached and editorialize too much.

Why the character's activity?
My protagonist, Kate Caraway, is an advocate for animal rights. The story begins with a major disruption in her life. She was forced to leave her elephant project in Africa and return to the US. She returns to Texas to recover and becomes involved with a prominent, but shady character who raises and trains greyhounds.
What prompted you to write about animal rights?
I researched greyhound racing and was appalled at what goes on behind the scenes. I wanted people to be aware of the issues involved and to consider adopting one of these beautiful dogs.
Any relation to you in real life?
I have a passion for animals. I used to be a member of Wildlife Rescue, Inc. when I lived in Austin. I rehabbed and raised orphaned wildlife with the goal to release them back into the wild if possible. It was a very rewarding experience.
Do you have dogs in real life?
I love dogs! My husband and I are dog-less at the moment. We were blessed with two mutts that were part of our lives for almost fifteen years. They've been gone for many years, but I have their photos in a locket I wear everyday. They were both rescue dogs and they changed my life by teaching me about unconditional love.

Upcoming...
My second book in the series is A Two Horse Town, is about saving wild horses in Montana. Book three, Eagle Crossing, is about rehabbing animals on Lopez Island near where I live in Washington State.

She’d been foolish and gone off alone, now she might have to pay the ultimate price…
The rocks along the bottom of the creek bed seemed to disappear. Kate felt the ropy, gnarl of tree roots instead.
The cedar break. She was approaching the road and soon the water would pass through the culvert. She knew that she would not make it through the narrow tunnel alive. Her lungs screamed for air. With one final attempt, she grabbed hold of a long cedar root growing along the side of the creek bank and hung on. Miraculously, it held. She wedged her foot under the tangled growth and anchored herself against the current. Inching her way upward, she thrust her head above water and gulped for air. But debris in the current slapped her in the face, and leaves and twigs filled her mouth, choking her. Dizziness overcame her ability to think—exhaustion prevented her from pulling herself higher.
She must not give in. Fighting unconsciousness, Kate inched her way up a little farther, and at last was able to take a clear breath. Her right arm hung loosely by her side, the back of the shaft had broken off in the tumble through the current, but the arrow was lodged in her arm. Numb from cold water and exhaustion, she lay on the bank as the water swept over her, and then, as quickly as it had arrived, the flow subsided and the current slowed. If she could hang on a few moments longer, survival looked promising. As thoughts of hope entered her mind, Kate feared that her pursuer might not have given up the chase. Perfect, Kate Caraway, just perfect. You screwed up again, she chided herself as the lights went out.

Kathleen Kaska is the author of the award-winning Sydney Lockhart Mystery Series set in the 1950s and the Classic Triviography Mystery Series, which includes The Sherlock Holmes Triviography and Quiz Book.
Her first two Lockhart mysteries, Murder at the Arlington and Murder at the Luther, were selected as bonus-books for the Pulpwood Queen Book Group, the largest book group in the country. Her latest Sydney Lockhart mystery, set in Austin, Texas, is Murder at the Driskill.
She enjoys birdwatching, and is also author of The Man Who Saved the Whooping Crane: The Robert Porter Allen Story (University Press of Florida).
Posted by CA Verstraete at 12:00 AM