Seems I haven't done this for a while, so it's time for another #1LineWed!

You'll be hearing a lot about the upcoming book in the next two weeks so bear with me. 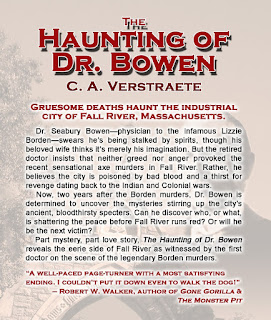 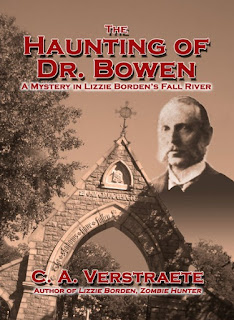 The Haunting of Dr. Bowen, A Mystery in Lizzie Borden's Fall River is on pre-order for Kindle!  (Yay, it even got a number ranking now in the #300,000s. Please order so the number goes lower!) It releases August 4th - the 125th anniversary of the Borden murders.

* I'm at the print approval stage. (The book is 141 pages, and includes an excerpt of Lizzie Borden, Zombie Hunter.) (new 2nd edition with new link and cover)

So for 1 Line Wednesday - #1LineWed - it seemed fitting to give you a little sample!

As in the Lizzie zombie book, I've included quotes from the actual Borden trial and newspapers of the day.

Here's the start to The Haunting of Dr. Bowen, A Mystery in Lizzie Borden's Fall River! (Shh it's more than 1 line! haa!)

“Never did I say to anyone that she had died of fright.
My first thought, when I was standing in the door, was that she had fainted.”
—Testimony of Dr. Seabury W. Bowen, Trial of Lizzie Borden, June 8, 1893

“Why won’t anyone believe me? Why, Phoebe, why?”
Dr. Seabury Bowen shoved back the shock of white hair hanging over his forehead and wiped a wrinkled hand across his stubbled chin.
His appearance, like his surroundings, could stand a bit of major housekeeping, not that he cared a whit.
“Here, it’s here somewhere,” he mumbled.
The old man rummaged among the giant pile of documents, books, and what-not littering the large walnut desk in his study. Several minutes later, and after the search through dozens of loose papers, he saw the faded red book lying beneath a tottering pile. He pulled at it, sending the rest of the stack falling like so much unwanted garbage.
The good doctor, but a shadow of his once-robust self, flipped the pages. He stared at the offending journal entry before setting the book aside with a heartrending sob.