It's mid-summer - already!! I'd say here's some hot reads but it's rather cool here at the moment I'm writing this. (Which may change). Hey, get some HOT reads anyway!!
** Don't forget to sign up for my newsletter - see form on website. Some cool contests going! And you don't want to miss what's coming, either!

Sale. 99 cents!
Bad Beat, Regulator Biker Series Book 1, Carolina Mac - Annie Taylor loses the love of her life and ends up on the hit list of a rival biker gang. She heads to Vegas with her bodyguard Jackson, but when his father escapes from prison and tracks them down, roles are reversed. Now she must fight to save him.

Only the Dead Don't Die, AD Popovich -  Devastated after breaking up with her fiancee, grade school teacher Scarlett Lewis doesn't realize a super-flu is sweeping the nation. Searching for her sister, she realizes that others in this Creeper-infested world might not have her best interests at heart. With hope as her last defense, she must learn how to survive, without sacrificing her own humanity.

Elimination, (The Mind Breaker Series book 1), Marina Epley - For fans of The Hunger Games, Maze Runner and X-Men. Immerse yourself in a gritty YA dystopian adventure with telepathy, hypnosis and mind reading.
Eighteen-year-old Rex is trying to survive in a dangerous world where the government hunts down, imprisons and even kills those with psychic abilities. He’s a mind breaker, considered not only a deviation from the norm but the biggest threat to society.Once he reveals his abilities for hypnosis, the deadly hunt begins…

City Under Ice, Into the White Book 1, TE Olivant -
Under the ice the cracks are beginning to show...Lisanne has only ever wanted to keep out of trouble. But when her best friend is exiled it shows the corruption at the heart of the city under the ice. To find out the secrets of her city she must go to the one place she has always feared: the White.Kyrk is a Hunter, living on his wits out on the frozen earth. Soon he learns that his world is stranger than he ever imagined. The clans are fighting and he must find out why before it is too late. But when he meets the girl from under the ice all his problems start to make sense. Together Kyrk and Lisanne must prevent a war, and save both their races. (Amazon UK)

House of Bellaver, Erika Mailman - In this literary ghost story, a 1800s family surrounded by Shakespearean artifacts struggles with the aftermath of the son's untimely death. Because his father was a California governor, the Bellaver home is preserved as a house museum more than a hundred years into the future. The modern-day director fights to save his job at the ailing facility, while the new docent, a Goth girl who claims to see spirits, wants to hunt down rumors that persist about the young Oliver Bellaver. The two team up to learn the truth in a novel about suffrage, familial betrayal, the uncomfortable gulf between masters and servants, how we remember history and preserve its objects—and whether we should.

THE HAUNTING OF DR. BOWEN, A Mystery in Lizzie Borden's Fall River, offers another glimpse into the aftermath of the Borden murders - and reveals the secrets of Fall River from the viewpoint of Lizzie's doctor and neighbor! See webpage for details! 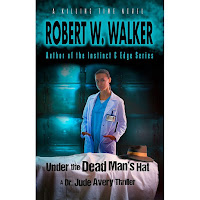 Under the Dead Man's Hat, A Dr. Jude Avery Thriller, Robert W. Walker - From a master thriller writer who grew up in Chicago!
When homeless wounded warriors are found dead in Chicago, it's up to Assistant Medical Examiner Jude Avery MD to  uncover clues, chase leads and track down the madman responsible for the brutal deaths. But Jude soon finds that this isn't sport, but a killer seeking a bigger thrill. And she doesn't know whom she can trust, or how far she'll have to run to catch the killer.

Pre-order sale. 99 cents!
Cimmerian Shade Boxed Set, Limited edition, Various authors - Dare to discover what lurks in the shadows in **New & Exclusive** paranormal and urban fantasy stories from your favorite NY Times, USA Today, and International Bestselling authors. Under moonlit skies, witches, werewolves, vampires, demons, dragons, and more, battle not only for their mates, but to stay alive...
Fall for the alphas who play by their own rules despite the odds, whether century-old curses or forbidden love, or worse. For them, what lies in the darkness is worth the fight when it comes to romance. (iBooks - Nook - Kobo - Goodreads) 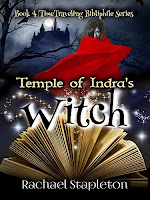 Sale! 99 cents for July
The Temple of Indra's Witch - Time Traveling Bibiophile book 4, Rachael Stapleton - Sophia Marcil closed the book on magic long ago when she married Cullen O’Kelley and opened her beloved shop in Dublin. She’s taking life one page at a time until an old acquaintance darkens her doorstep and reminds her of a grim prediction made sixteen years ago—one that involves her daughter, her grimoire, and that threatens time travel once more. Since cursing Sophia more than five-hundred years ago, the witch has become disillusioned with life and she’s ready to return to 1494, where her enmity began. The witch claims there’s no time like the present to re-write the past, but can the woman who once cursed them be trusted to hold the pen?

* New 2nd edition & new cover!
VOTE! - Up for a Raven Award in Horror for Best-Reviewed Books at Uncaged Books Magazine. I could use your votes!


One hot August morning in 1892, Lizzie Borden picked up an axe and murdered her father and stepmother. Newspapers claim she did it for the oldest of reasons: family conflicts, jealousy and greed. But what if her parents were already dead? What if Lizzie slaughtered them because they’d become zombies?

Pre-order- Releases July 11
Nights of the Living Dead: An Anthology - edited by Jonathan Maberry and George Romero. Stories based on the 1968 Romero film that started it all - Night of the Living Dead.  Can't wait to read this!