Yes, I'm behind! But it's not too late to get some GREAT reads for the March Reading List!! 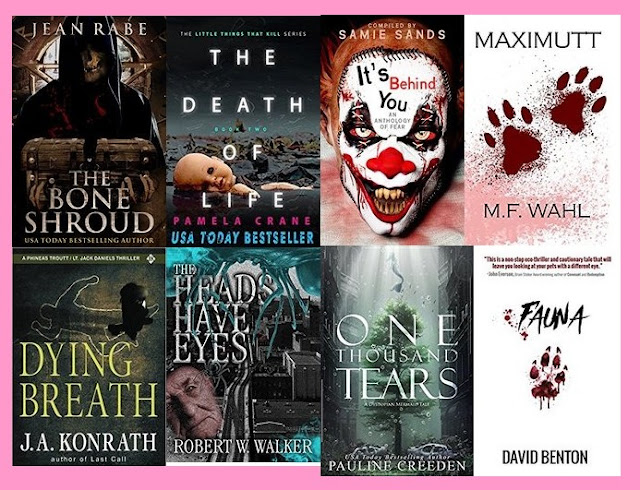 It's Behind You, An Anthology of Fear, Samie Sands - Eighteen authors answer the question, What's Your Biggest Fear? (The clown cover is one, isn't it?)

Maximutt, M.F .Wahl - Maximutt's world has fallen apart. Now the little dog must escape the house in a world of horrors, and prove there's still love and valor in this world. Set in the world of her Disease novel. (Who can resist a dog story? As long as he doesn't end up dead  - or undead!)

Murder She Reported - Peg Cochran - 1930s New York is the setting for a wealthy socialite turned tabloid reporter who lands in the spotlight when a socialite ball turns deadly. (Pre-Order, releases July 31)

Olivia Twist, Lorie Langdon - Twist on Dickens' Oliver Twist has Olivia masquerading as a boy for her safety until she's rescued from the streets. Now 18, her life is changed when she's taken in by an uncle and enters society, but she can't escape her past...

The Heads Have Eyes, Robert W. Walker - Horror writer enters the creepiest zone with this new novella in his eerie, nostalgic Chicaghosts series. The description alone is enough to give you nightmares - parasitic spiders inside human... heads - heads which become too heavy to be supported. (Read with the lights on and the bug spray close! EGADS!)

They Feed, Jason Priest - The campgrounds are full tonight, and the creatures are starving. Tonight, they feed. (NOTE: And if that doesn't scare ya!)

Dying Breath, Phineas Troutt Mysteries, J.A. Konrath - Problem-solver Phineas Troutt pairs with Konrath's homicide cop Jack Daniels and PI Harry McGlade, except they don't know they're working the same case - a club of rich twenty-somethings who think they can get away with anything, including murder... They're wrong.

The Death of Life, (The Little Things that Kill series, book 2), Pamela Crane - USA Today Bestselling Thriller author's latest has rookie PI Ari Wilburn searching for a former sex trafficked woman's daughter sold on the black market. But finding the girl may mean taking her from the only family she's known, unraveling family secrets, and stopping a serial killer targeting those close to her. Is reuniting mother and daughter worth destroying the child's life - and possibly her own?

Fauna, David Benton - In the depths of the Amazon rainforest a shaman utters a dire warning foretelling the string of grisly and seemingly unconnected animal attacks that become more and more common around the globe. Then the attacks become a massacre leading to a single purpose: the culling of the human race.