Happy July! Fill up that Kindle with some great books! I'm featuring a horde of zombie books this time for you z-fans! Lots of GREAT books to keep you busy!!! 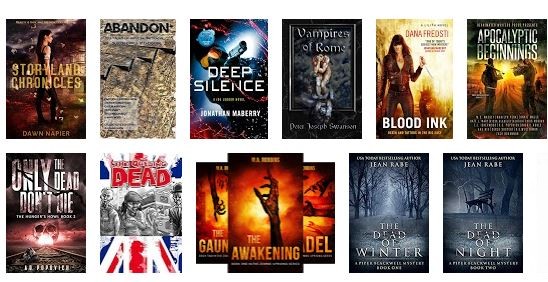 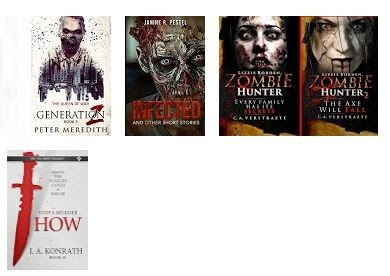 Storyland Chronicles, Dawn Napier - Fairy tale creatures and mythical monsters have crept out of the dark corners of humanity’s imagination, and mankind is now an endangered species. New double book with added chapters!

This is cool! A listing of over 100 of Stephen King's short stories online.

Abandon - 13 Tales of Impulse, Betrayal, Surrender and Withdrawal  -  Thirteen stories that run the gamut of emotions... Abandon hope all ye who enter. Stories by A.F. Stewart, Chantel Boudreau and others; edited by Julianne Snow.

Deep Silence: A Joe Ledger Novel (#12), Jonathan Maberry - (Pre-Order, releases Oct. 30) You don't get more excitement than this! Terrorists-for-hire have created a weapon that can induce earthquakes and cause dormant volcanoes to erupt with vibrations that drive  ordinary people to suicide and violence. A wave of madness sweeps the country beginning with a mass shooting in Congress with an end-game that involves igniting Yellowstone's caldera, the super-volcano that could destroy America. Joe Ledger and his team go on a wild hunt to stop the terrorists and uncover the global super-power secretly funding them.

Lilith - Blood Ink, Dana Fredsti - (Pre-order, releases Nov. 6)  Having killed her last producer, stuntwoman Lee Striga's next film shoot takes her to the voodoo-soaked bayous and haunted back alleys of New Orleans, where sinister supernatural figures stalk the streets. In a dark corner of the French Quarter, an arcane tattoo artist is using his clients in rituals that will open an inter-dimensional gateway for a demon god from beyond the stars.

Vampires of Rome, Peter Joseph Swanson - In 16th century Rome, Giotto remembers how he became a vampire and how his life became entangled with the life of two kings in history.

In The Dead of Winter, (Book 1, Piper Blackwell Mysteries, new covers and editions!), Jean Rabe - Piper Blackwell faces his first grisly murder, 58 minutes into her first day on the job as the new sheriff in sleepy Spencer County, Ind. She needs her chief deputy's help to solve the murder - a chief deputy who thought the job should've been his - and track down a killer before everything, including her own department, fall apart.


In The Dead of Night (Book 2), Sheriff Piper Blackwell rushes to a clandestine meeting with an aging, paranoid veteran who believes spies are trailing his every move, she is caught in a fierce thunderstorm. Putting a name to the skeleton on the bluff, and searching for the thief who robbed the old veteran of his life’s earnings, sends Piper delving into the sleepy towns that dot her rural county. Now she’s digging into pasts perhaps best left alone.

Stop A Murder - How (Mystery Puzzle Book 1, Puzzles 1-12), J.A. Konrath - Something different. Solve mystery puzzles via clues and answer questions on the killer's website to stop a murder. (Stand-alone, but it's a continuing five-book series. Works best with Kindle Fire or the Kindle App. Uncover more clues in each book.)


Generation Z: The Queen of War (Book 3 of series), Peter Meredith - (Pre-order, releases July 20) The war spirals out of control. Now Jillybean's secret is out - she started the war. Her arrest brings with it the first order: Jenn must become queen and execute the woman she once loved.

Infected and Other Stories, Janine R. Pestel -  Ghosts, horror and zombies! Three short stories sure to require the light on! (Love this cover!) 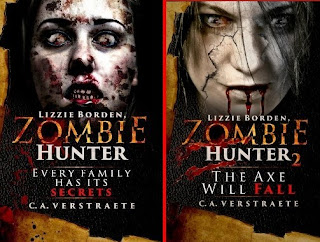 Lizzie Borden, Zombie Hunter 2: The Axe Will Fall, C.A. Verstraete - She'd thought life was getting back to some semblance of normal, then they returned. Whether she wants to or not, Lizzie is swinging her axe again... 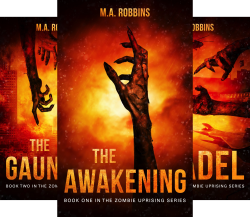 Only the Dead Don't Die 2: The Hunger's Howl, A.D. Popovich - Just when Scarlett thought they could ride out the Super Summer flu’s un-deadly aftermath . . . their safehouse is shattered. On the run from Ravers, hordes, and a mysterious presence that always seems to find them, Scarlett vows to protect Twila. At all costs!  And, as the pandemic’s survivors flee for the hope of a new life in Last State—so do the hordes.

The Queuing Dead: A Very British Zombie Anthology - How would Londoners react to walkers? Fifteen zombie stories set in the UK by Ian Woodhead and others.

Zombie Uprising, 4 book series, Mike Robbins - From Book 1: A deadly secret lies hidden beneath the arctic tundra, but now the ground is thawing…and the dead are rising...   Jen Reed joins her retired archaeologist father in remote Alaska, hoping to re-establish a long-missing relationship. But when the thawing permafrost outside a village reveals the burial ground of a 19th-century whaling crew, Jen and her father fail to heed the warning of village elders and begin removing bodies for study.