About Wet Work:
Dick Thornby is not Hollywood’s idea of a spy. In his rough and tumble job there are no tailored Italian suits, no bimbos eager to please, and no massive underground fortresses built by evil overlords seeking world domination—just an endless series of sinister threats to the safety and security of the billions of mundane citizens of the planet. Sure, Dick's tough and he knows a few tricks to help him get out of a tight spot, even if his boss accuses him of over-reliance on an abundance of explosives. But he's also got a mortgage, a wife upset by his frequent absences on "business" trips, and an increasingly alienated teen-age son who spends way too much time playing in gaming worlds on the computer.
After taking personal revenge on the criminal behind both his son’s injuries and the continued disintegration of his marriage, Dick Thornby is teamed with Acacia (“Ace”) Zyreb, a young, female agent from the East European office of the Subsidiary, to deal with the mystery behind coordinated hacking of the braking systems of several car models.
Doing his best to maintain his vows to his wife, Dick struggles to deal with the inexperience and provocative attitude of Ace on her first non-European mission. Their somewhat combative investigation takes a left turn by uncovering a much more sinister threat to the world and to Dick's family. He's willing to risk his job, his partner, and his life to eliminate the threat, but the clock is ticking.

Favorite Quote:
Here, Dick and his new partner look up at the sky at night:
She heard her companion give out a short huff. “Some people see it that way. Me, I think that if ... just possibly, mind you ... if we’re the only intelligent life in the big, wide universe of which the Milky Way is only an infinitesimal fraction, then keeping the world safe and its inhabitants as happy and healthy as possible is the most important, most monumental, and most sacred task in the universe.” He paused. “And, I think I’d damn well better not screw it up.”

Story Inspiration:
Well, of course, Wet Work is a new adventure in a series which started with Net Impact, so my biggest inspiration was to find something new for Dick to do that was in the same spirit as the first adventure. And, I don't want to be too specific and create any spoilers for the reader. But, I think there are a couple of hallmarks for my Dick Thornby adventures: The first is that Dick is a regular guy who always does what needs to be done in a situation, despite the personal cost to himself. Secondly, there are a lot of weird facts in the world and a lot of even weirder websites, blogs, YouTube videos, and conspiracy theories about those things on the World Wide Web about those things. I like to both educate the reader about such things and have some fun with the wild theories that get so much attention about those things.

Excerpt:
Dick’s foot jabbed repeatedly at the brake, but nothing happened. The car kept picking up speed as it rapidly approached the steeper portion of the unimproved roadway leading hikers to the pathways at the south end of the Route of the Volcanoes.
“Pull the emergency brake,” Dick yelled as he suddenly started yanking the wheel left and right in rapid succession, the car caroming from soft shoulder to soft shoulder, sending dirt and gravel flying.
Was he insane?
She grasped the center-mounted lever for the emergency brake on the second attempt and yanked awkwardly upward. There was no resistance; there was no effect. She stared at Dick in horror for a split second before his gaze shifted to the rock-strewn slope plummeting away on both sides of the steep crest roadway. Dick jerked the gear shift, dropping the transmission into a lower gear, causing the transmission to whine like a banshee. Their momentum slowed and her mood shifted just as rapidly. Then they tilted over to the steeper portion of the descent. In no time, they were plunging just as fast as before. To the right, on the wetter west slope, a tangle of bushes gave way to saplings and trees at lower elevations. Dick continued to slalom from side to side of the narrow roadway as his head jerked from side to side. Ace gritted her teeth as a huge pothole loomed.
Sakra!
Dick seemed to steer straight into it, twisting the steering wheel hard to the right, so the left front tire hit the far edge of the deep divot sideways. She heard an explosive pop as the left front tire burst. The car shuddered for a moment as the corner dipped, slowing the jalopy momentarily before it powered out of the hole, headed for the narrow right shoulder and the rocky slope beyond.
Kurva!
This time her partner didn’t turn the wheel back to the left. Instead, they tilted over the edge and the car picked up even more speed. With the left rim slicing into the shallow volcanic grit, the rear of the vehicle slid faster downslope than the front. Dick once again wrenched the steering wheel hard left. Sharp, heavy volcanic rocks bumped against the bottom, tires, and side of the car.
If she hadn’t belted in, Ace was sure she would have been thrown into the roll-bar and canvas top of the four-wheel drive, if not thrown out of the vehicle completely. As it was, she hung on for precious life, pressing herself against the seat back, bracing herself as best she could against the terrors of the inevitable, when the car would flip and roll topsy-turvy until it hit a tree or rock too big to dislodge.
Wham! Bam! It was if Dick was aiming for the largest rocks in their path. The car groaned and metal squealed as parts of the undercarriage—exhaust system, oil pan, rocker panels, transmission—were ripped away during their tumultuous descent. The shrubs and trees were coming up faster ... much faster ... than she liked. Seconds before they hit, Dick grabbed the gear shift again, this time forcefully ramming it into reverse. She heard a grinding sound as the car spasmed, a rapid series of jerks slowing the momentum, then a sudden bang as the transmission, no doubt, dropped off the vehicle.
The four-wheel drive jalopy jolted forward, unimpeded by the friction of the gears for a microsecond just as they got to the tree line. She threw her arms over her face to protect herself from being impaled when a branch thrust through the windscreen. She heard the shushing scrape of vegetation envelop the vehicle, then the scraping and snapping of splintering branches, as her body leaned forward from deceleration.
Then, the front of the car seemed to tilt upward and her head nearly bumped into the windshield before the airbags deployed as the jeep slammed to a sudden stop. The airbag thrust her arms hard into her face, which shoved her head into the headrest behind. Then the bag rapidly deflated.
When she lowered her arms and opened her eyes, she saw a miasma of white powder swirling in the air and coating both the car and her. She looked to her left and saw Dick, dusted in white and his face in a fierce expression, like some Kabuki Samurai. His arms were folded over his chest as he gulped in huge breaths of air. His demeanor and his breathing quickly calmed.
Finally, he looked toward her and spoke. “Well, that was interesting.”
Kurva to hovno! “Interesting?” She vibrated in rage. “You almost fucking killed us!”
Dick tilted his head to one side. “How’s that? I didn’t make the brakes fail.” 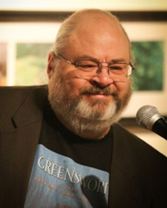 Donald J. Bingle  is the author of six books and a member of The International Thriller Writers, the Horror Writers Association, the Science Fiction and Fantasy Writers of America and the International Association of Media Tie-In Writers. He was once hit by lightning, which might explain his writing more than 50 short stories featuring killer bunnies, Renaissance Faire orcs, giant battling robots, demons, cats, werewolves, time travelers and about everything else.
He also was the world's top-ranked tournament player of classic roleplaying games like Advanced Dungeons & Dragons for 15 years. Learn more at his website.