*  See Day 1 post & giveaway.
This month's reading list was so much FUN to compile & WOW! Great stuff to read as I kept coming across something different to add!
Be sure to check out the cool monster-themed  stuff  and giveaway  at the end, too!
Don't forget to follow along with the rest of the blogs this week, as well.
HAPPY HALLOWEEN!!!! 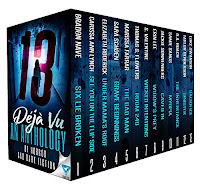 13 Deja Vu: Anthology of Horror and Dark Fiction (Thirteen Series Book 2) -  Samie Sands, Thomas S. Flowers and others - Thirteen chilling stories are about to test the limits of your fear, ready to show you the daunting truth of what lies beneath… The family with buried secrets. An old factory hiding shadows within its walls. A serial killer honing his deadly skills. It’s all here, about to prove that nothing is ever as it seems. Think twice before you switch off the lights, before you close your eyes and say goodnight.

Abandon: 13 Tales of Impulse, Betrayal, Surrender, & Withdrawal - Anita Stewart  and others - Thirteen stories focusing on the betrayal, urges, and the choices we make that can forever change lives.

Descent into Darkness - Tony Urban, E.E. Isherwood, C. A. Verstraete and others - Dive into the darkness with 20 stories exploring ghosts and monsters, demons, and forces of evil.

Tricks Treats & Zombies: Halloween Tales of the Living Dead, ATZ Anthology - Hordes of monsters, gnashing teeth and mouths - and this time "you" are the treat in stories from 19 authors, with a foreword by Joe McKinney.

V-Wars, Vol. 3 Night Terrors,  Jonathan Maberry - Maberry, Tim Waggoner, John Everson and others share stories from reporters embedded with the Beats, humans, and of the reporters, the Bloods, the humans and the Bloods, the vampires, in tales of heroism, horror, despair and courage as the war blazes. (The V-Wars series will be airing on Netflix in 2019 starring Ian Somerhalder.)

I bet you didn't think this was a category, did you? Well... it seems there are some creepy good choices out there...  You never know what I'll find. I'll be doing another post soon and include a bunch more choices. 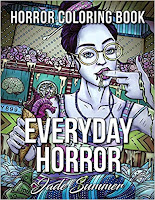 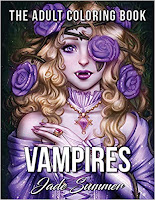 Blackened Magic (Mistakes Were Made Book 1), Emily Cyr & Jojo Barlett - Sawyer's in big trouble. Lord knows, she's never been a great student, but she never expected to be an inch away from flunking her economics class this close to graduation. Failing is definitely not an option and she's running out of hope. That’s when her roommate suggests contacting a warlock who will sell her an oh-so-illegal spell to help her pass the final.
Kane is almost a free man...er warlock. He has one last job to do for the magical cartel, and then he's out of here. But before he delivers the cartel's spell to them, he takes a call for a side job-- to deliver an outlawed spell to a desperate college student. Only, he screws up. Big time. Both Kane and Sawyer must dodge the magical police, the cartel, and enemies neither of them knew they had. If they don’t fix Kane’s mistake, it will cost them more than Sawyer’s life; it will cost them everything.

Hackers, (Novellette , Hackers Collection), M.A. Smith - 'It went wrong. We all knew the theory of veins and wire and the connective tissues that linked tech to flesh; but when it came right down to it, none of us knew anything about real-world torn, soft pulsing muscle or the grey slide of that stuff just under the top layer of skin. We got the arm attached, but Margey died that night.'

His Angelic Keeper, Melinda Kucsera - First book in a humorous, action-packed sword-and-sorcery series starring Sovvan from the Curse Breaker series. With no allies to help her, this plucky ghost must brazen her way through the formless, memory-leeching gray of limbo to the purple spires of heaven itself. And that might not even be enough to stop what's coming.

Souls of the Dark Sea, (Saga of the Outer Islands Book 2),  A.F. Stewart -  (See all sellers) The armies of the dead are rising - and their master is not far behind. Captain Rafe Morrow, God of Souls, will face a creature from the depths for control of the dead and the survival of the living.

Blood Claim, Claire C. Riley - Terror lurks in the hearts of men who quickly learn that the stuff of nightmares is all too real and what starts as a new beginning, rapidly becomes a frightening ordeal of horror and bloodshed.

Goatbusters, Chicaghosts Series, Old Fart Squad Book 3,
Robert W. Walker - If you like old Chicago history, horror and humor, you'll enjoy the only horror/humor novella series by this prolific author of 80 novels. Who you gonna call when a monster lurking in the Chicago River is luring people and feeding them to its young?  Why, the Old Fart Squad of retired detectives, of course.

The series starts with Gone Gorilla, focusing on a haunted museum and Chicago's famous and now stuffed gorilla, Bushman; and follows with The Monster Pit, "pitting" the retired detectives to face the Lovecraftian creatures crawling out and snatching people into the giant Spire hole in downtown Chicago. Finish it off with book 4, The Heads Have Eyes, a garish novella of parasitic spiders. I'll let you read the rest of the description, heh-heh.

Lost Girl of the Lake, Joe McKinney and Michael McCarty - Skinny-dipping in the lake with a mysterious local girl takes Mark Gaitlin into the fire and brimstone religion of snake handlers, abandoned villages and his own family's dark secrets.

The Assassin's Coin, John Linwood Grant - There is Jack the Ripper, and then there is another... Mr. Edwin Dry, the Deptford Assassin. The truth is not what you believe.  It's what he makes it. 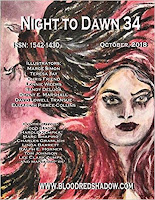 Preach on Havoc, Dreams About Vampires, Book 1 , (Pre-Order, releases Oct. 20) Alice de Sampaio Kalkuhl - Local priest Llywelyn Driscoll is trying to lead a quiet life, until he is forced to deceive an obnoxious detective and try to stay true to his principles as he is confronted with the source of the vampires' curse.

Sunwalker (Sunwalker Trilogy), S.t. Sanchez - Lily is a sunwalker, a vampire with human parents, able to walk in sunlight. then she meets one of her own kind. As the vampire, Tread, begins to open Lilly's eyes to a world she has never known, Lilly must decide where she belongs. When she's forced to submerge herself entirely in the vampire world, she'll discover that Tread has a secret so shocking it could destroy them all.


The Last American Vampire, Seth Grahame-Smith - (See this link for free preview, 1st 3 chapters) Sequel to Abraham Lincoln, Vampire Hunter. Love this movie and just found this book - it's fantastic! Various historic elements like the Ripper murders and characters - Arthur Conan Doyle,  Henry Irving, Edison and others - people this sweeping saga that spans the decades as vampire Henry Sturges tries to find purpose after the death of his friend, Abe. (And the beginning - whoa!)

Legion of the Undead,  Michael Whitehead - The greatest fighting forces, the Roman Legion, meet their match in hordes of undead.


Lizzie Borden, Zombie Hunter, C.A. Verstraete -  On sale! Everyone's heard the old rhyme, Lizzie Borden took an axe and gave her father 40 whacks... But what if the murders happened for another reason? What if Lizzie did kill her father and stepmother because they'd become... zombies?

Lizzie Borden, Zombie Hunter 2: The Axe Will Fall, C.A. Verstraete - On Sale 10/25!  The trial over, Lizzie and the citizenry of Fall River now must battle a new surge of flesh-eaters, this time with a heartbreaking twist: the infected creatures are friends and family, hidden away by their grief-stricken caregivers. When her sister Emma becomes a pawn in the growing war against the undead, Lizzie has no choice but to pick up her axe again. But can she overcome her personal demons and the rampaging monsters, no matter the cost? NOTE: There are spoilers if you haven't read the first book, Lizzie Borden, Zombie Hunter.

Only the Dead Don't Die, A.D. Popovich -  Teacher Scarlett Lewis soon finds there are worse things than a break-up like the super summer flu - and those who survive it. Hope may be her last defense.

When Blood Reigns, Barbara Custer - Marked for death, Alexis accompanies her lover, Yeron, and four survivors of a zombie invasion on a search for the renegades who created a chemical that induces a zombie-like state. Then her team is attacked and a survivor turns on her. When she's captured and becomes ill, can DNA splicing save her or will Yeron's attempts at rescue jeopardize all their lives?

Zombie in Chief: Eater of the Free World, Scott Kenemore - Fantastic idea and take on the 2016 elections. Follows real-life with some horrific twists!
* Get free Halloween animations and more. 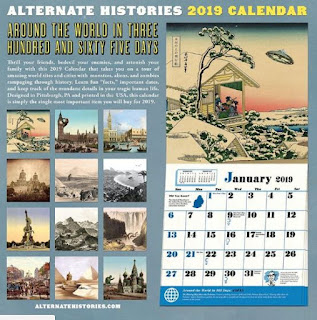 * Something fun: Check out this 2019 Calendar - with monsters like Godzilla, aliens and more! - from Alternate Histories.