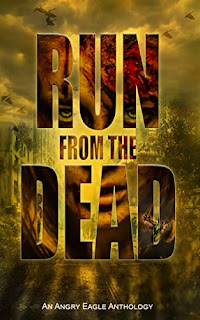 Run From the Dead: A Zombie Anthology features a dozen new stories with layers of horror and the depths some people go for survival. BONUS: A world scavenger hunt! Each stoiry contains a certain set of words. Can you find them?

In my story, "Of Life, Death, and the Krieg," a man "wakes" to a new, nightmarish world amid a horde of zombies. Is he alive... dead... or something else?

Project:Seize by Angela R. Watts
Where the infected are more than a horror but a product of ... Was it a mistake?

Popping the Cork by Teel Jame Glenn
Where there are more than one kind of zombie and these are terrifying.

Pursuit by J.J.Y. Sharpe
The most fearsome of the zombie world... the ones that think.

Mud and Blood by C.A. Moll
A horrible account of trying not to be seen by the ravenous horde.

When One Door Closes by C.A. Moll
Can Matt make it home?

Gifts from the Sea by S.P. Oldham
A master of the horror and zombie genre this story leaves us with a feeling of wonder.

Of Life, Death and the Krieg by C.A. Verstraete
Makes one wonder if zombies are really undead or if they are something else.

Monstro by Philip Harris
What happens with zombies crash the party is anything but funny.

Darcy and the Horde by S.E. Griffin
A regular in the Angry Eagle Anthology books S.E. Griffin does not fail to bring it in this latest gust of horror.

Wrath by DJ Cooper
Prominent author of the apocalypse DJ tries her hand at zombies. A mother faced with the unthinkable. Could you?

Posted by CA Verstraete at 4:30 AM