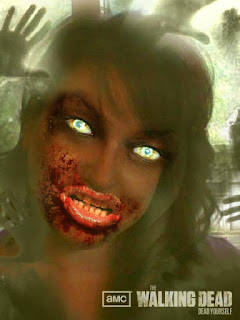 Me on a Monday after losing an hour of sleep. Damn you daylight savings!
Have you zombified yourself yet? Go to AMC The Walking Dead Website.


First of all, this is my first post and I want to thank Christine for inviting me. :)

My name is Kristen Middleton and I am the author of the Zombie Games Series, which was first published in May of 2012. I live in the Midwest with my hubby, Dave, and two daughters, Cassie and Allie. During the day I run a small daycare and at night after my family goes to bed, I pick my brain for new ways to kill the undead while putting a smile on my reader's faces. Most of my books have an element of humor which makes writing more enjoyable for me, as most would say- I'm a little wacky myself.

Before I even considered writing Zombie Games

, I spent most of my days watching children running through my yard playing 'tag'. It wasn't until I realized that they were pretending to be zombies that I started to take more notice of this new undead craze that had even captured the interest of preschoolers. Then there was my husband and two young daughters, all monopolizing my Kindle because of an application called "Plants vs Zombies". It didn't take me long to figure out that zombies were now the thing and I could either embrace or ignore that fact. Being a horror book and movie fanatic, I obviously opened my arms as well as my laptop and began my own journey into the world of rigamortis, blood, and rotting flesh. Speaking of rotting flesh - Vicks anyone?

(Make sure you have a jar in your bathroom if there ever is a zombie apocalypse, it masks the smell of death and makes you sleep easier at night when you have that dreaded cold-even a zombie apocalypse won't wipe out the common cold-I'm just saying)

But seriously, why are zombies so interesting? I think there are many reasons that people love to read and watch movies about zombies, first thing being is that it allows us to escape for a while into a world (which we know we can come back from) where nothing matters but staying alive and taking our aggressions out on objects that won't make us feel guilty about doing so (besides, they want to eat our brains!). It's also the end of bills, finding a better job,  and those annoying telemarketers. Besides getting the heart pumping and reminding us how vulnerable we really are, why do you think zombies are so popular these days?

Posted by Kristen Middleton / K.L. Middleton at 2:00 AM