Excerpt from "The Zombie Syndrome"


When I wrote Neeta Lyffe, Zombie Exterminator, I decided to do something different.  Since the plot took place in Hollywood at a reality TV show, I had one of the writers working on his documentary about zombies.  It turned out to be a really fun way to introduce people to my world, crack a lot of jokes, and do some fun things with zombies that did not fit in the events of the novel.  I’d like to share a bit of that with you.


Incidentally, both this incident and Gary Opkast make an appearance in I Left My Brains in San Francisco as well. 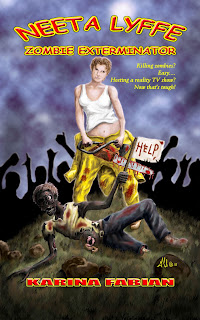 Notes for: The Zombie Syndrome
A Documentary
By Gary Opkast

Film clip of a zombie clawing its way out of a grave (NOTE: Check YouTube; InsaneCandid is supposed to have a good one, and his family may sell the rights to pay for his funeral expenses.)
NARRATOR: The world has been living under the zombie threat for over two decades, yet where did this threat originate?  Did it begin with a single human, or a simultaneous uprising?  Did the zombie syndrome migrate to other countries, or did it spring simultaneously, as it were, from the grave?  The answers to these questions could give scientists a much-needed break in isolating and resolving the cause of zombie-ism.  So the search continues for that elusive first case--the one scientists call "Zombie Zero."
Cut to DR.  BEN HANSEN (CORRIANDER SPICE) (Need background visuals--something non-zombie-ish but interesting enough to detract from digitized face effect): "The problem we're coming up against is in the reporting.  Sure, now, you call 9-1-1 and tell them there's a zombie on your lawn, and the Z-mat team comes right away, but who would have believed this twenty-three years ago?"
Cut to re-enactment of 9-1-1 call.  Note on bottom: 9-1-1 call, Pleasantville, KY, Oct 31, 2019, 11:35 p.m.
"9-1-1, how may I help you?"
"Please!  Help me!  There's a, a zombie and it's--"
"Where are you?"
"I'm in a barn off Countryside Lane!  My boyfriend and I were on a drive and we ran out of gas and now--"
"'Ran out of gas'?"
"Shut up, okay?  There's a zombie and it broke the window and pulled Billy out of the back seat and--"
"Miss, have you been drinking?"
"Shut up and help me!  I'm in the barn and it's coming after me and I think Billy is too!"
"Miss, could it be they're just playing a joke?"
Screams.
Cut to clips of the barn, the bodies with sheets over them, one hand, obviously zombified, peeking out.
NARRATOR: "It was no joke.  Barbie Munchausen, 17, and her boyfriend, Billy Stakes, were discovered by police officers lurching hand-in-hand down Countryside Lane.  When they attacked Policeman Lance McRue, his partner, Dougie Marsh, a longtime fan of zombie films, decapitated them with an ax.  Even so, officials were slow to believe the zombie story until McRue himself re-animated an hour later.  This was the first confirmed case of zombie-ism in the United States, but was it the first?"
HANSEN: "Not a chance.  We have found veiled references to the undead back to the mid 2010s.  Before that, we had some vampire sightings, but we're pretty sure that was part of the Twilight craze.  Vampires!  Come on--who's going to believe that old tale?"

Posted by Karina Fabian at 7:34 AM