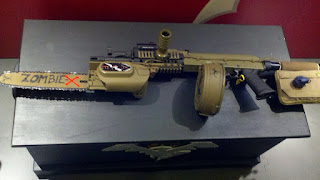 It looks cool.  It's got everything you need: large clip to hold lots of ammunition and a chainsaw when you run out of bullets.  Sadly, though, this gun wouldn't be that practical in the zombie apocalypse.  Can you imagine how heavy it would be?  Not only do you have to carry that, along with ammunition, food, and water, but you'll need fuel to run the chainsaw.  Otherwise, it's worthless.

Everyone has jumped on the zombie bandwagon.  It's a great place to be.  There is ammunition tailored specifically for zombies.  There are a slew of guns out there that claim to be the best weapon when it comes to killing undead.  In truth, any gun is going to work just fine.  As long as you have ammunition for it and know how to use it, you're golden.

One of the things I like to do when writing my books is research guns.  While any gun will work just fine, it's nice to showcase a new one or find something that hasn't been seen very often.  Plus, I like guns so I like to be informed.  All of the details might not make it into the novel (most readers really don't care about the specs of a gun.  Plus, it makes the book read like a manual when you put those in), but I have them in the back of my mind.

For example, Krista in Life After the Undead and Death to the Undead is quite partial to a Zigana T.  It's a great gun and looks cool.  By the way, that site is a great place to get gun information.  I've used it often.

I have to be careful while researching guns and not show them to my husband.  I'm pretty good about finding nice, reliable, expensive guns, and he thinks he needs them.  It's tough because I want them around when the zombies rise up, but guns are useless without ammunition.  I'd rather have a few good guns and spend the rest of my money on bullets.

While it's not going to make or break your story if you have the latest or newest guns, it's still worth doing a little research to see what's out there.  Like I said, there are a lot of "zombie" weapons, but not all of them are practical.  If you want your story to be "real," I suggest having weapons that are real.  Take the time to see what's out there.  If you get the chance, go shoot the gun to see what the recoil is like, how it feels in your hand.  If "real" doesn't figure into your story or what type of weapons your characters carry, then the sky is the limit, and guns like the one pictured above will work just fine!
Posted by Pembroke Sinclair at 12:00 AM

Email ThisBlogThis!Share to TwitterShare to FacebookShare to Pinterest
Labels: death to the undead, life after the undead, pembroke sinclair, safety, weapons, zombies