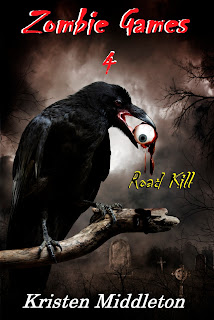 Writing this book has been tough and I'm still debating on how to end it. This is the fourth in the series (beginning with Zombie Games (Origins))

and I've come to love the characters and to say goodbye, well, it's almost  like losing a bunch of really close-knit friends. That being said, I guess I will have to really listen to those voices in my head- Cassie's, Allies, Paige's, Henry's, and even Kristie's. Is the game over or will I need to create higher levels?

I know my readers are enjoying the books and keep asking for more, so there is also that factor to consider. Being a "Walking Dead" fan, I just want to keep watching more...more...more...and the thought of that television series ending would be a real bummer.

Anyway, I have made a commitment to finish the fourth installment of Zombie Games, Road Kill, so that it is available for sale on Friday, April 12, 2013 for a special promotional price of $.99 ( the Ebook, that weekend only).  Watch for it on Amazon, Barnes & Noble, and Smashwords.com.
Posted by Kristen Middleton / K.L. Middleton at 12:00 AM