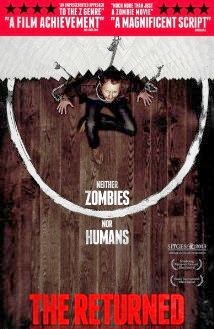 In The Returned , the world is post-zombie and people are living via anti-viral drugs. Thanks to modern medicine,  those who are bitten but caught in time can get a daily shot to stop the transformation into zombies. It's a human-zombie limbo called The Returned.

Whoa... read that first part again.... and read the synopsis for my zombie book, GIRL Z: My Life as a Teenage Zombie (which came out in July, 2013 and was turned into the publisher last December, 2013):

The Z infection, however, has mutated, affecting younger persons like her, or those treated early enough, differently. Now she must cope with weird physical changes and habits no girl wants to be noticed for. Then she meets Gabe, a good-looking part-Z like her, and fears falling for him. After all, how can he, who shows hardly any Z symptoms, be interested in someone like her?

But time is running out... Becca needs his help as she and her cousin Carm search for their missing mothers and fight off hungry Zs.

In my book, the infected are treated with drugs, which don't always work and may, or may not, stop the final transformation. Those infected who are young and strong turn into part-zombies, resulting in a new population with a special diet and needing special considerations that not everyone is happy with, or wants to deal with...

I have a slightly different twist but.... doesn't it sound familiar?