Finishing up with the last post where I asked female horror authors to share their thoughts on what made them horror fans for  WOMEN IN HORROR MONTH.

What's interesting is that all three of today's guests were influenced by horror at early ages. 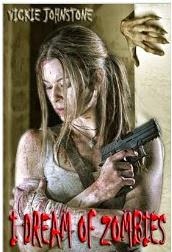 Vickie Johnstone, author of I Dream of Zombies

says a Stephen King book was a big

influence on her. Maybe because she read it when she was so young.

She recalls, "I was somewhere between nine  and 11 years old. I  was in Junior School and was in the top of my English class. (I'm not sure if I was top or shared as there were other winners too.)  Anyway, the prize was that we were taken by our teacher to the bookshop and could choose a book. I chose Christine

by Stephen King. to my teacher's astonishment, but she let me have it." 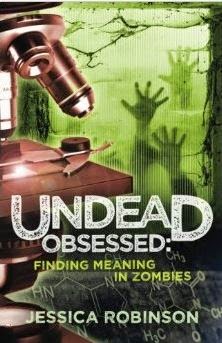 Pembroke Sinclair,  author of  The Appeal of Evil and (as Jessica Robinson) of Undead Obsessed: Finding Meaning in Zombies, is a huge horror film fan, so naturally a film made a big impression on her.

She says, "the first horror film that grabbed my attention and made me a horror fan was Aliens. I’m not exactly sure how old I was, pretty sure it was late grade school (5th or 6th grade) or early junior high, but I do remember it was the first TV we owned that had stereo sound.

" I was convinced that a facehugger was in the closet, and it scared the hell out of me. The movie frightened me, but it also intrigued me, and from there my love affair with horror developed. To this day, my goal is to become an Alien Queen."

Julianne Snow, author of  Glimpses of the Undead

,  was introduced to horror at a very impressionable age.

She says, "the first horror film that grabbed my attention was Alien and I watched it when I was three in an ill-advised moment of weakness undertaken by my parents. Admittedly, I didn’t make it through the entire movie, but I do remember much of what I saw that night. I can’t say I enjoyed feeling the fear washing over me, but it obviously had an effect on me."

When I was four, I happened to catch Romero’s 1968 Night of the Living Dead on television and I was enraptured by it. I think it was in that moment, watching the black and white masterpiece, my love for horror and zombies was born.

"It’s a film I still watch and one that still gives me the chills. Not many films can do that—to me at least. I’m not sure I can answer the ‘why’ part of the question—as unique human beings, we like what we like and sometimes, there’s no explaining why that is." 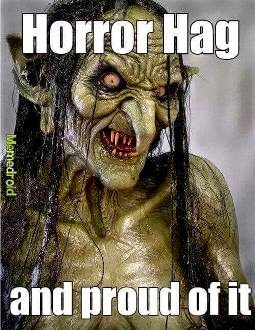 ***  I want to thank the authors for their contributions. And thanks to all the readers and visitors who stopped by for Women in Horror month - or as it's also come to be known - Horror Hags Month.
Hey, nothing wrong with being a HAG (Horror Author Gal!), right?