Loved this idea for "List of the Day" I found at Paste Magazine. Their list? The 15 Best Zombie Movies. Their list I'll admit had quite a few films I'd never heard of, and haven't seen yet. (And can you believe that 500 movies were made with zombies? Only?)

My take: I think the all time worst zombie movie I saw in recent years was one where it was part game show and wrestling and zombies... I don't remember the name as it was so bad I turned it off after 10 minutes.

Of note: One I'm sure I've seen being a Bela Lugosi and old movie fan: 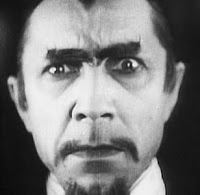 My take: This was the first zombie movie I saw in color which made the gore more horrific. This and "The Pit and the Pendulum" are two movies I've never forgotten.

My take: This classic is considered to have started it all, and remains a favorite. There is something about the starkness of black-and-white that makes it more horrifying, yet touching, without grossing you out.

** What are your favorite zombie movies? Which ones did you think should've stayed buried?